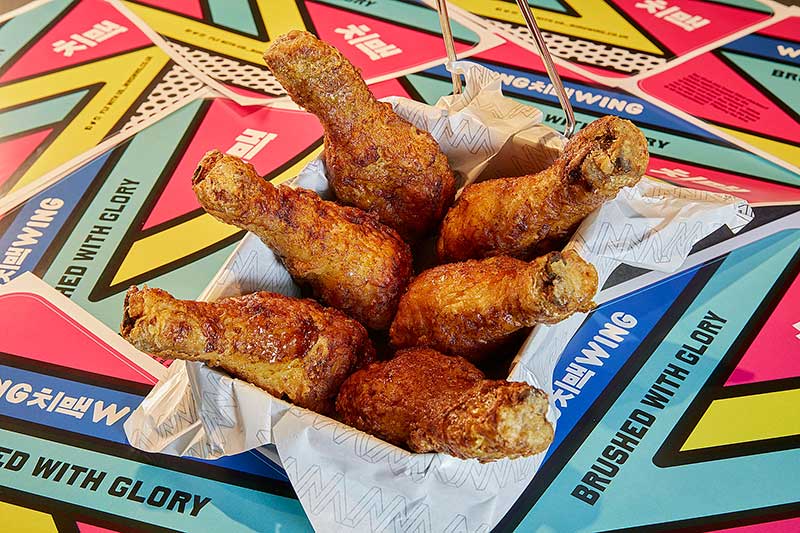 In a nutshell: Korean fried chicken and beer

Summing it all up: Hammersmith is getting a huge new palace to Korean fried chicken wings and beer and this branch of Wing Wing has two private karaoke dining rooms too.

West Londoners will soon have a new place to get their KFC - Korean fried chicken - fix when Wing Wing opens there next week.

It's the second venue for the Chimaek chicken joint - that's the Korean pairing of fried chicken and beer which originated in New York - which opened its Bloomsbury branch last summer. But this one's a whopper - taking up 5,000 square feet over two floors. The ground floor is all take-away and delivery - and if you work nearby you can take advantage of their new corporate delivery offering, delivering anything from single lunchboxes to party packs and 100 wing trays - way to perk up a boring meeting.

Downstairs there's room for 180 folk to scoff their wings. And they'll have two private dining karaoke rooms featuring 60-inch TV screens and the latest karaoke equipment - plus a special, dedicated cocktail bars and a teeny tiny disco floor for two

Food wise, it's much the same as the original place - so chicken wings double-fried Korean-style and individually brushed with a choice of three glazes; Soy Garlic, Hot or Liquorice. And you can add in Katsu Bao, Seaweed Fries and Kimchi Coleslaw.

For drinks there's what they're styling a ‘Bottoms-Up’ beer system which is DIY, self-service, ice-cold pints in four to seven seconds with the beerpoured from the bottom up through the base of the glass. These can be used either up at the bar but the private dining rooms will have these built in. So those sound like a LOT of fun.

Where is it? 18 Hammersmith Broadway, London, W6 7AB