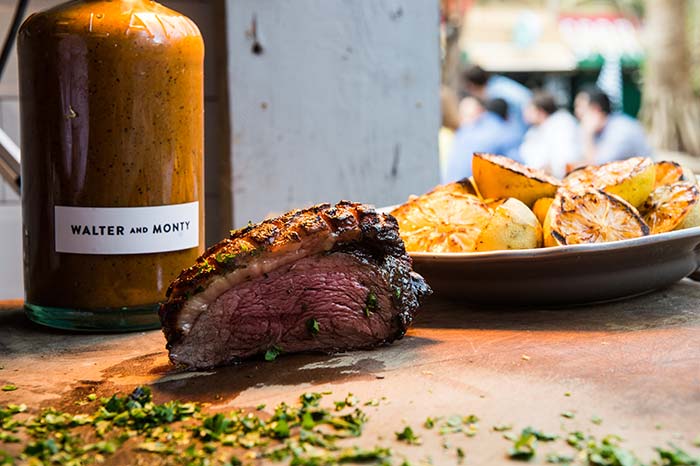 The latest street food to grow roots is Walter and Monty - best known for popping up at Night Tales and more markets across London. Billed as "street food with Michelin expertise", it's from founder Alex Kaye (who's looking after the menu) and with Head Chef Nick Ross who has worked with American chefs Daniel Boulud and Scott Conant (Scarpetta).

As for the food, expect a strong focus on meat and fish charcoal cooking with Eastern flavours. So the menu includes beef picanha sourced from Smithfield and butterflied leg of lamb marinated in mint, garlic and lemon. You can have those wrapped in a flatbread or straight up with rice and salad. Plus the six sauces on the side include Scotch Bonnet or Feta and Garlic.

Salads will be a big thing, including:

The design of the restaurant will be from the same people who put together Night Tales and will be designed to give you a great view of their two big grills in the open kitchen - and there will be plenty of banquette seating - each with its own premium beer on tap if you want instant access to beer at all times of your meal.

Walter and Monty opens at 6 Bury Court, London EC3A 8EP at the end of March 2016. They'll be opening for lunch first, adding dinner later. For more, follow them on Twitter @walterandmonty.