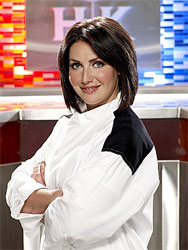 When single mother Holli Ugalde won Hell's Kitchen USA there was a lot of buzz over the fact that she'd be working for Gordon Ramsay at the much-anticipated reopening of the Savoy Grill. But the dream could remain just that if the American winner doesn't manage to resolve issues over getting hold of a working visa. The Sunday Mirror reports that, as the situation currently stands, Ugalde will not be working at the Savoy because her application for a working visa has been turned down. Holli told the newspaper she 'felt crushed when I found out I wouldn't be going to London...It is deeply disappointing that I will not be working at the Savoy Grill.'

When Hot Dinners spoke to Savoy Grill executive chef Stuart Gilles about Holli's position at the Savoy Grill just a month ago he told us: 'Holli’s certainly going to be working hard, that’s a fact. I hope she knows that!

'It’s an amazing opportunity for her, winning the show' he said, but added that 'the point for her is not to come here and run the kitchen. With the best intentions, we all know that’s not going to happen, because she doesn’t have the experience and she doesn’t know London. Even if she’s the most talented chef in the world, she’s still not going to come in and run that place.'

Now it seems, unless her visa problems are ironed out, that Holli won't be coming to the Savoy at all. A spokesperson for Gordon Ramsay Holdings said: 'We are sorry that Holli won't be joining us due to her application for a working visa being turned down.'