Vinoteca's next wine bar to land in King's Cross 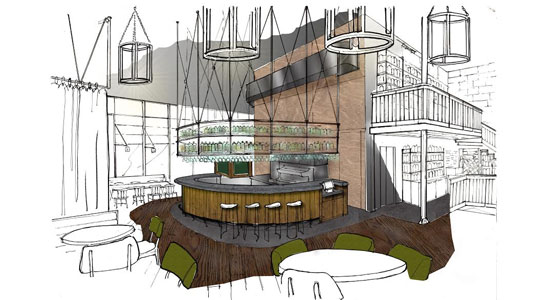 King's Cross is slowly becoming one of these best places in London for food and drink (something of a minor miracle if you consider what it was  - like in the area less than a decade ago). And now the latest to join in is Vinoteca, taking prime place at One Pancras Square.

It'll be the fifth, and largest, site for Vinoteca and it'll be opening while they celebrate the 10th anniversary of their first opening in Farringdon. There will be room for 90, including an outdoor terrace that will seat 30 and it'll be open all day from 7am to midnight, making it the first Vinoteca to serve breakfast - handy for King's Cross commuters. In addition to this, it will also have a self contained wine shop (their largest yet, with 250 wines available) for those same commuters who want to take something home with them.

In charge of the food is head chef Kieren Steinborn (previously at Alain Ducasse, Michelin-starred Thackeray’s, head chef at The Swan at Shakespeare's Globe) who is running a menu inspired by the Mediterranean and beyond.

Breakfast and weekend brunch at Vinoteca Kings Cross will include light and healthy options such as prunes with orange compote and muesli with ginger wine-soaked raisins alongside more traditional offerings of coddled eggs or grilled manx kipper, mustard butter & lemon. They'll also be offering £1 espresso at the bar, and a selection of freshly baked pastries and homemade cakes.

Of course, wine will be a big focus of the new Vinoteca and this will be the first to feature "breakfast wines" - a selection of low and no alcohol wines offered alongside champagne and moscato. They'll also be featuring keg and bag-in-box wines plus two wines poured fresh on tap.

Vinoteca King's Cross opens Late March at One Pancras Square, King's Cross. There will be a soft launch from 10-19 March with 50% off food and drink. Hot Dinners readers are the first to be able to sign up to that soft launch - just sign up for details here.