Vegans get their own King's Cross food festival, courtesy of KERB 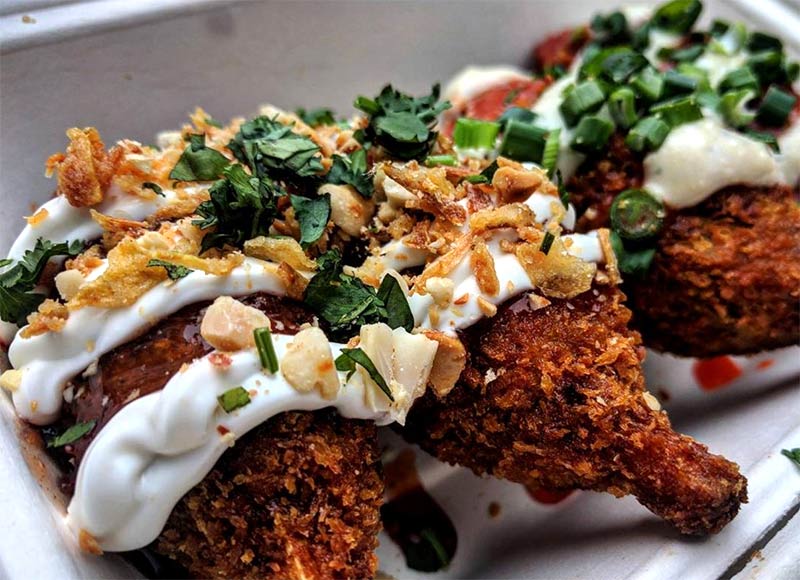 Vegans, start your engines. You’re about to get an entire food festival devoted entirely to animal-free food, courtesy of street food mavens KERB when they temporarily shack up in King’s Cross Canopy.

Livin On The Veg, as they’re calling it, will consist of eight vendors who'll all be trying to outdo each other in a chance to be crowned the best. It's all part of 'Ultimate Vegan Rumble' -  so there will be brownies, there will tacos, and yes, there will even be deep fried 'buffalo' wings, and not a one of them will have anything to give vegans cause to pause. Rather admirably, they’ve also steered away from the old trope that vegan = healthy. “Not a mung bean, or buddha bowl in site,” proclaims KERB. Sounds good to us.

If you’re yet to try jackfruit, the new vegan ingredient du jour that is *the* single closest thing you can get to the texture of pulled pork (so we hear), then you can try Biff’s Jack Shack’s double-fried jackfruit buffalo wings (that's them pictured above). They come with a healthy dose of bourbon hot sauce and blue cheese to give it that BBQ flavour. Or you can give seitan a go, which makes an appearance in Eat Chat’s Korean BBQ Banh Mi mash-up dish, which also has mushroom walnut pate and pickled carrots.

Not quite sure? Here are the rest of the vendors.

There’ll be three bars, all of which will be serving up vegan creations from cocktails to beer. And if you get a bit tipsy, you’ll certainly enjoy Mr Potato Head’s vegetable decorating corner (disclaimer: we're not 100% sure what this is.)

Your ticket price, prices from £25 will include a sample from all eight of the traders, equipping you with the relevant experience to cast your vote for your favourite food.