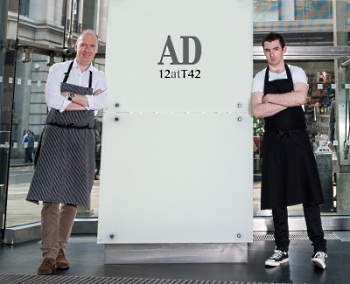 In an inventive use of restaurant space, chef Antony Demetre has signed up to run a 12 week popup at the high rise restaurant in Tower 42 in the city in the run up to Jason Atherton opening a permanent space there in the Spring.

The name of the pop up - AD12 atT42 - sounds like a code you'd need to break, but the whole idea does seem like fun. It'll be a markedly less formal place to eat than the previous incumbent which was a Gary Rhodes restaurant. Head Chef Patrick Powell has been for two years with Demetre at Wild Honey (and before that at Knockranny House Hotel in the west of Ireland).

There'll also be a working lunch menu with two choices for each course and a tasting menu with a choice of 3, 4 or five courses.

City folk not wishing to get too squiffy before heading back to the desks will like the idea that, as with Demetre's other restaurants, there'll be plenty of good wines here served by the carafe too.