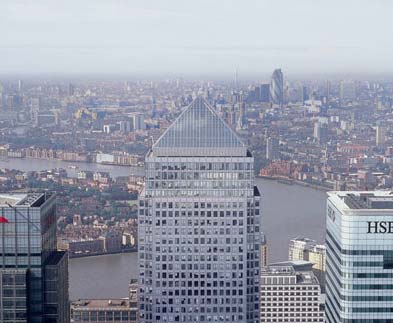 One thing we've noticed in our Coming Soon list is that the vast majority of restaurants are opening in East London, and now we're seeing a push further east with a number of Canary Wharf announcements. The one to watch, however, is the new opening from Tom and Ed Martin who will be in prime position in Canada Square with their One Canada Square bar and restaurant, at the foot of Canary Wharf's landmark building.

It's taking up a large space - 5000 square feet - and is being designed by David Collins studio, best known for being behind the design for Brasserie Zedel, Bob Bob Ricard, The Wolseley and loads more. Apparently they'll be using "the lobby's trademark green Italian and Guatemalan marble" to create pillars for the new restaurant (an effect that worked well at Massimo).

We caught up with Tom Martin, co-founder of ETM Group to find out more. "Following the successes of our two London restaurant and cocktail bars, The Botanist on Sloane Square and Chiswell Street Dining Rooms in the City, we have been actively looking to expand our restaurant and bar portfolio," he told us. "Canary Wharf has been on our radar for a long time and the opportunity to work with Canary Wharf Group plc and to open a site in the lobby of one of London's most iconic buildings (One Canada Square) is second to none.

"We have had the pleasure of working with David Collins Studio on the design and build (and continue to do so) and we are now in the middle of developing an exciting range of menus including what we hope will be one of the capital's best weekend brunches. We will have lots more news about One Canada Square over the coming months so watch this space!"

The chef has also been revealed as Jamie Dobbin, who has been head chef at the Club at the Ivy since it opened in 2008 (and at the Ivy restaurant, Connaught, Savoy and Berkeley before that).

The One Canada Square restaurant and bar will be open all day from 7am - midnight Monday to Friday and from 9am – midnight on Saturday (with brunch on Saturdays until 5pm).

One Canada Square in Canary Wharf will open October 28.