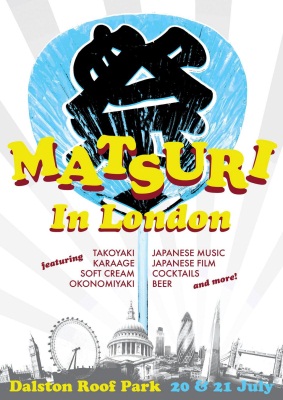 Pretty much anything chef Tim Anderson does seems A Good Thing - so when we heard he was behind the upcoming Matsuri festival in Dalston, we asked him to tell us more.

"Basically it started with a conversation between myself and Fumio Tanga, who operates the street food stall Shofoodoh, which serves okonomiyaki. He's currently running a pop-up at Pacific Social Club in Hackney as well. Anyway we were talking about how much we missed matsuri (festivals) in Japan. They're one of the highlights of Japanese summertime and they're filled with great food, plenty of booze, good music and all-around good vibes. There's a real community atmosphere about them and we wanted to bring that to the UK.

"Fumio had a contact at Dalston Roof Park, and they loved the idea. So we secured the venue (and a perfect venue at that) which suddenly made it very real! Since then we've been putting together a lineup of Japanese food traders and we are in the process of booking musicians. We'll also be showing some great, family-friendly Japanese films after dark. We're decorating it with paper lanterns and also planning to get some Japanese drinks at the bar to complete the matsuri vibe."

As for what will be served up during the event, Tim gave us a first look at the menu (which may be subject to change):

Priority tickets have now sold out and give holders priority entry between 3 and 6pm (although you can stay as long as you like). Otherwise it will be first come first served and when the venue reaches capacity it will be one in/one out. You're probably best off heading there after 6pm although expect to queue. Dishes will be priced between £3 and £6.