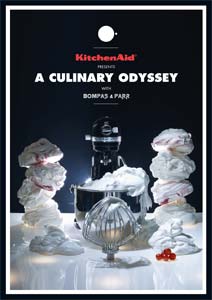 Tickets go on sale tomorrow (8 March) for one day event with Bompas & Parr looking at the food of the future. The pair have jumped into bed with KitchenAid for a day focused on space age food and drink.

The menu for A Culinary Odyssey will incorporate genetic modification, entomophagy, nutraceuticals, nano-technology (nope - we only have the barest idea what those are). According to the press release the evening's cocktails and canapes will feature Bombas & Parr's take on Burgess's Milk Plus from A Clockwork Orange as well as "bio-luminescent enzymes, cooking with liquid hydrogen, sugar in the air, cooking with liquid hydrogen and the most intoxicating drink in the galaxy". There'll be a cookie of nostalgia - inspired by the Wachowski Brothers' Matrix trilogy and a Pan-Galactic Gargle Blaster from Douglas Adams' Hitchiker’s Guide to the Galaxy.

Bompas & Parr are being joined in their endeavours by The Experimental Cocktail Club (ECC) who'll be making the science fiction cocktails and we're particularly intrigued by Poietic Studio who are going to be responsible for building food levitation devices. Sadly there's no mention of food replicators.

The installation will take place at One Marylebone on 21 March from 6.30pm to 10pm. Tickets go on sale from noon on the 8th March for £5 from www.jellymongers.co.uk (you must be 18 or over).