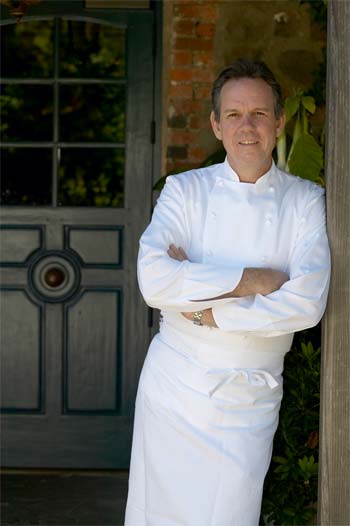 A veritable brigade of chefs and other foodie people turned up at Harrods tonight for the launch of Thomas Keller's French Laundry pop-up. Hot Dinners spotted Michel Roux Jnr, Fergus Henderson, Jay Rayner, Fay Maschler to name but a few, milling around in the store's penthouse to welcome chef Keller to these shores.

"If I look nervous, it's because I am," Keller told the room. "This is our first endeavour outside the United States, especially at this level." He revealed discussions had been going on since April last year between Harrods and the French Laundry team. "People ask me why Harrods. Well I can't think of any place better in the UK to do a pop-up restaurant."

"They're actually going to construct not a replica, but a dining room upstairs in the Georgian restaurant on the seventh floor that will resemble our restaurant...we're going to bring as many ingredients as we can from America but we won't be able to bring 100%, so the products we're going to be featuring from the UK are very important to us.

"I'll be here every service, lunch and dinner for those ten days,' he said. 'I've made sure my team have two days off so they'll be able to explore London...but I won't. I want to make sure I'm able to say hello to everyone who comes to our restaurant. It's very important to me to make that connection."

Later on, we nabbed Keller for an exclusive chat with Hot Dinners, and asked him how he felt about the homage supperclubs, such as The French Launderette which have sprung up for Londoners who can't afford the £250 his Harrods restaurant will be charging. "As long as it's positive, I'm happy with it," he told us. "It's a wonderful thing. I often get sent pictures by people who've made dishes from my books, so this kind of thing is really exciting to me - it's all good!"

There's been a lot of speculation on whether Keller's decision to do a London pop-up might herald a chance for him to test the waters here with a view to opening a place here, but apparently that's not the case. "I'm sorry. I love coming to London, but I don't see me here for the foreseeable future. I'm focused on this - but the event here at Harrods doesn't have anything to do with future plans to do something or not to do something."

The good news is that the huge buzz surrounding this event means that Harrods are undoubtedly going to do more of these restaurant events. They won't do pop-ups just for the sake of it, a spokesperson told us, but as long as they're as exclusive as the French Laundry they'd like to do a few a year.

Finally, we asked how the Harrods menu might differ from the original restaurant menu: "You'll see a typical French Laundry-style menu," he promised, "so we'll have the oysters and pearls (one of their signature dishes), but the menu isn't finished yet because we haven't refined yet the ingredients we're going to be able to bring. Once we have that, the final composition will come together."

Booking for the French Laundry at Harrods will open on 1 September 2011. Lines are open from 5-8pm on 0203 0596498 (calls will be diverted to the Californian booking line). You can book just one month in advance, so on 1 September you can book for 1 October and so on. There are 70 seats available for the nine course menu at both lunch and dinner.