[SIGPLUS_EXCEPTION_SOURCE] Image source is expected to be a full URL or a path relative to the image base folder specified in the back-end but /blog/2013/dreamteam/gallery is neither a URL nor a relative path to an existing file or folder.
0
Shares 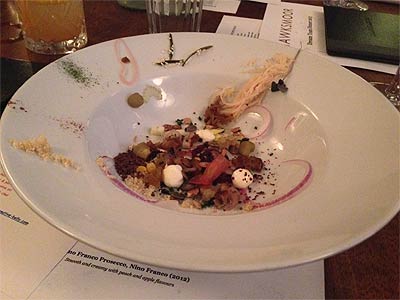 For the third year running, Hawksmoor Guildhall was the setting for the very special Hawksmoor Dream Team dinner, which sees top chefs got together to create a one-off meal for Action Against Hunger. While last year's focused on seasoned Michelin-starred chefs, this year saw some of the 'most exciting chefs in London at the beginning of their career' according to host Will Beckett take the reins. We were invited to watch them in action.

The night kicked off with some rather special canapés by James Knappett from the Kitchen Table - including the chicken skin which has made an appearance at his restaurant going down very well here. Then for starters, Ben Spalding moved his 30 ingredient salad that we tried at John Salt on, creating a 50 ingredient broth complete with broccoli dust and Holy Fuck sauce which was pretty legendary.

This was followed by Tom Sellers from Story, who brought one of the signature dish from his restaurant, scallops with cucumber and dill ash. For the main, Pitt Cue Co's Tom Adams created a smoked pork jowl with apple ketchup which was a step away from what you'd expect at Pitt Cue, but one of the best pieces of meat we've tried for a while.

Rounding things up we're the jellymongers Bompas and Parr who in a finale spectacle brought out an incredibly alcoholic jelly (containing absinthe) lit from beneath. Every diner had to don special psychadelic specs making the waiters - who were all wearing special lights - look as if they were made of rainbows. The jelly was pretty good too.

It was Sellers' first time away from the kitchen in months (although he was on the phone to Story at every possibility).  Knappett has closed Bubbledogs for the night and we heard that Tom Adams is gearing up for a revamp of Pitt Cue Co (including improving the air con downstairs). But everything went with out any visible hitch, delivering a truly one-off and excellent dinner, raising over £70k for Action Against Hunger in the process. We can't wait to see what the Dream Team comes up with next year.

For more about Action Against Hunger, go to their website.