The Principal London takes over from Hotel Russell on Russell Square 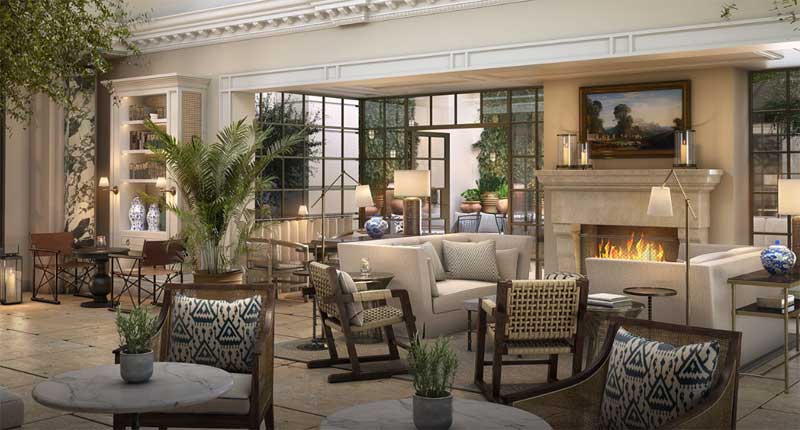 Updated 16/11/17 with restaurant and bar details

If you've been wondering what's happening with the old Hotel Russell on Russell Square which is currently swathed in scaffolding, then let us enlighten you. The hotel has been taken over by the Principal Hotel Group, who also run hotels of the same name in Edinburgh, Manchester and York. The Principal Manchester impressed the Guardian's Marina O'Loughlin. They are spending a LOT on the hotel, but keeping key historical details like the lucky dragon on the hotel's grand staircase - a nod to the hotel's original designer who was also responsible for The Titanic.

There are going to be four key areas to eat and drink in the hotel - here's what we know so far:

Now this is the one you're going to want to pay attention to. Described as "a neighbourhood restaurant created in partnership with three-time Bib Gourmand winner Brett Redman, and stylist-turned-restaurateur Margaret Crow" they're aiming for a Bloomsbury salon for the 21st century vibe. Redman and Crow joined forces to open the Richmond gastropub in Hackney back in 2015 and Redman also owns Elliot's in Borough Market. Food wise we understand there'll be a pretty amazing seafood platter and they'll be putting on a British take on caviar with blinis, but using sourdough crumpets and clotted dream instead.

We're suckers for a bit of Grande Dame hotel glitz and the restored Palm Court with its own listed ballroom sounds like it'll be a pretty decent place for a glamorous London afternoon tea.

Back when it was the Hotel Russell, and the Hot Dinners team was fresh out of college, the bar here was one of our favourite off-the-beaten-track spots in town for losing an afternoon in. The new bar at The Principal sounds like it'll be a very glam affair - think Great Gatsby for vibes. Running the bar will be Sean Fennelly - ex GM at Milk & Honey.

A coffeehouse by day and wine bar by night. The Principal Edinburgh has a Burr and Co in it - check out its menu here for an idea of what to expect.

More about The Principal London

Where is it? 8 Russell Square, London WC1B 5BE