The Meat Bar to open at Camden's Shaka Zulu 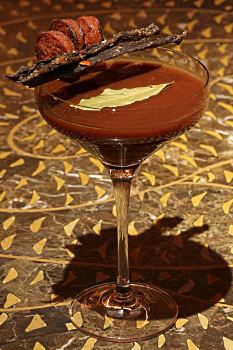 Forget Pitt Cue's ribs or MEATLiquor's Dead Hippy, if you want to be a bona fide meatfreak you'll have to head to Camden for The Meat Bar. Part of the Shaka Zulu restaurant, Meat Bar will serve up a variety of carniverous cocktails.

On the menu will be the Bloody Bacon, made from a 24 hour mature Bloody Mary mix, bacon vodka, garnished with celery, crispy smoked bacon and a skewer of soft cheese and cherry tomatoes. There's also the Meatequita, a blend of tequila reposado infused with chorizo, vegetable juice, balsamic vinegar, smoked sea salt pepper and port, which is then served either straight up or with beef biltong strips and chorizo.

It's not all red meat though as there's also a fish option - the Wheeling Salmon, made with smoked salmon-infused vodka with lemon pepper and ice, served with a host of traditional martini accompaniments including smoked salmon, stuffed baby red peppers and olives.

Alongside the meaty cocktails there'll be a new bar menu with snacks to compliment the drinks such as platters of cured meats and oysters.