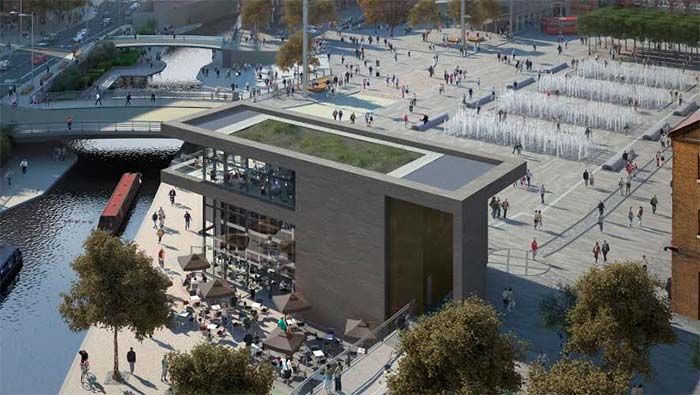 If you've been paying attention to our Coming Soon pages, you'll have seen news that Cubitt House (the people behind Percy & Founders) were planning to open the Lighterman at King's Cross - and now we have some confirmed news about that 2016 opening.

First off - it's a HUGE building - you can see it at the front of the pic above, taking pride of place on Granary Square. It'll be a three floored building designed by Stanton Williams, who are behind lots of projects all over the UK, including the nearby King's Cross Square and who are revamping the front of the Royal Opera House too. Expect lots of different areas, from bars to restaurants to private dining - and panoramic views from the top floor. They'll also have some canal-side alfresco dining.

As for the food, it's being looked after by the group's Executive Chef Diego Cardoso (previously at Murano) - but it's early days so no sign of a menu yet. All we know is that there is a wood fired grill and a pizza oven - but we'll add more details as soon as we get them.