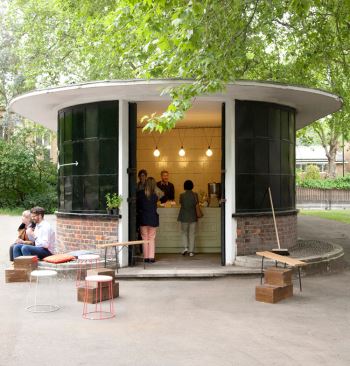 Breathing new life into Bethnal Green Gardens, The Kiosk Cafe has just opened its doors for a summer-long pop up. Located in what was originally a park shelter built in the 1920s, it's been restored by six local residents to its former art deco glory, retaining many of its original features such as the circular bench and ceramic tiles.

The cafe will be open every weekend until the end of August and will be serving up a selection of drinks, homemade cakes and ice creams. Drinks for sale include Monmouth coffees, fresh mint tea (from mint grown in local community gardens) and a homemade elderflower cordial. Cakes such as Montezuma chocolate brownies and Sicilian lemon cake will be provided by East London's Eat A Horse, and unusual ice cream flavours such as apple crumble with blackcurrant ripple, brown bread with marmalade, and walnut brittle will also be available.

The Kiosk Cafe will be open Saturdays and Sundays from 10am to 6pm at Bethnal Green Gardens, London E2 0EL. The gardens are located right next to Bethnal Green tube station. For more information see www.thekioskcafe.com