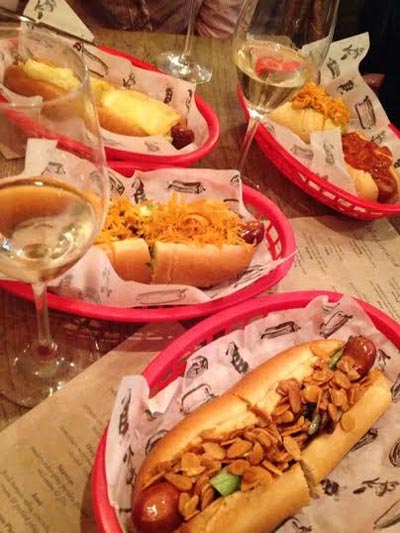 Love it or loathe it, the World Cup starts today and for the next four weeks it's not going anywhere. Even if you're firmly in the 'loathing' camp there's plenty to take advantage of at London restaurants over the coming weeks, whether it's bagging a normally hard-to-get reservation on match nights or eating your way through special world cup menus.

As part of this, Bubbledogs – the champagne and hot dog restaurant in Fitzrovia – has launched a limited edition menu of 'World Dogs' to celebrate football fever.

Hot Dinners popped down to Bubbledogs last week to preview the new menu and tried the Greek Stavros - aubergine, feta and red onion - and the Mexican Jose – pickled jalapeños, salsa, avocado and sour cream. Far from being too gimmicky, both combinations actually worked really well, especially on the Jose with the fresh salsa and avocado. All this was accompanied by golden, crisp tater tots, sweet potato fries and, of course, a few glasses of bubbles. All in all, an excellent result!

Here’s that menu in full.

The limited edition World Cup hot dog menu at Bubbledogs is available from now until the end of the World Cup at both lunch and dinner.

Bubbledogs is at 70 Charlotte Street, London, W1T 4QG. Find out more about Bubbledogs.