[SIGPLUS_EXCEPTION_SOURCE] Image source is expected to be a full URL or a path relative to the image base folder specified in the back-end but /blog/2013/happenstance/gallery is neither a URL nor a relative path to an existing file or folder.
0
Shares

The Happenstance bar is coming soon to St Paul's doorstep 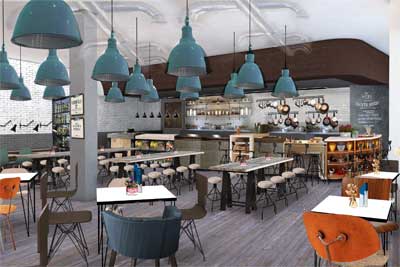 Good news for city drinkers. We've heard some exclusive details about The Happenstance, the next Drake and Morgan bar (who are behind the Anthologist and the Parlour, among others), opening in June at St Paul's. It's in an area that's been through quite significant development over the past few years, and this sounds like a pretty good addition.

This bar seems quite eclectic in nature, featuring everything from a mixology table to a florist. The main dining area has an open plan kitchen, with plenty of space for counter dining and lots of seating with the whole place taking roughly 230 (but we're unsure how much of that is bar space).

The menu will be similar to other Drake & Morgan menus - and that will include their great sounding funfair cocktails (see the goldfish in a bag below). However the Happenstance's separate deli sounds most interesting. During the day it will offer fresh baked bread, hams and cheeses from Borough Market producers as well as acting as a florist. In the evening, this room will be transformed into the mixology table. Downstairs there's a private dining room for up to 32, with a "1950's style kitchen" too.

As for design, the main ground floor will apparently have an "industrial backdrop" - so that means painted exposed brickwork, timber flooring and a mixture of furniture (we've some preview images below). The design has apparently been inspired by trips to Hong Kong, Tokyo and Shanghai. But the most important feature to many will be the floor to ceiling windows to show off the bar's view of St Paul's Cathedral - bound to be something that attracts the punters.

The Happenstance will open at One St Paul’s, London EC4M 8AJ on June 17. Find out more on their website www.thehappenstancebar.co.uk