The Frontline restaurant in Paddington is getting a major facelift 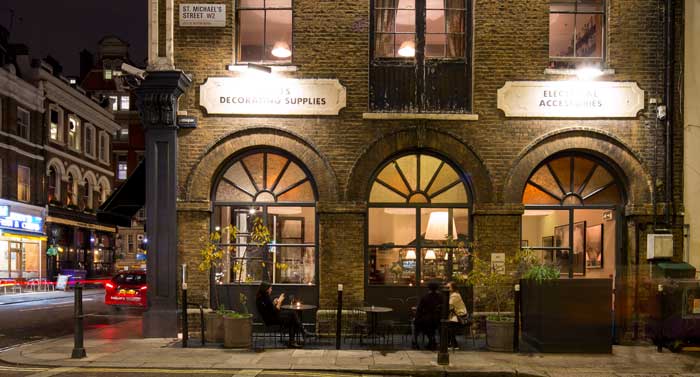 Giles Coren once called it "a staggering find: big, grown-up, lots of wood, but light and jolly with just a hint of foreign battles". Now Paddington's famous Frontline restaurant is having a major facelift.

If you haven't heard of the place before, it may be because this is the restaurant of a member's club (although it's always been open to the public). The Frontline Club is, as they describe themselves, "an internationally regarded watering hole for well- travelled journalists and their friends." The restaurant's housed in what used to be a 19th century factory for Hackney Carriages.

Over the next month or so the 50 seat restaurant will be completely closed while award-winning architects Skene Catling de la Peña and FAR Frohn & Rojas get to work. They'll introduce a new mezzanine level, with more seating for 23. And they'll be giving the bar area a good going over too bringing in a huge black stone central bar.

As for wine, expect a cracking list, as it's been compiled by wine consultant and blogger Zeren Wilson who also did the lists for Arabica, Shuang Shuang and the upcoming Kiln.

The Frontline restaurant is at 13 Norfolk Place, London W2 1QJ. It will fully reopen to the public on 3 October 2016 following a soft relaunch from mid-September. 020-7479 8950 Opening hours are Monday-Friday Lunch Noon-3pm, and Monday-Saturday Dinner 5.30pm-11pm. Keep up  with their news on Twitter @frontlineclub