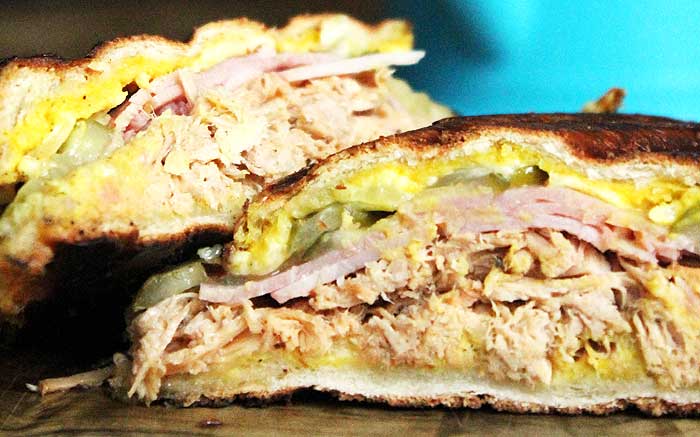 If, like us, you watched the movie Chef and came out dying to try a good Cuban sandwich in London, only to discover they're rarer than hen's teeth here, then we bring you great news.

The Forge Cantina is a Latin American street food residency running upstairs at The Forge in Camden and they've got this rather marvellous looking Cuban sarnie on the menu. The Cubano (£8.40) features hot pressed brioche packed with pulled pork, glazed ham, swiss cheese, fresh dill pickles and mustard (there's also a veggie version with roasted vegetables).

Other dishes on the menu include filled arepas from Venezuela (fried cornbread pockets served with a variety of fillings including shredded beef and pulled pork), feijoada (a traditional Brazilian pork and black bean stew), yuca fries, plantain chips and more.

The Forge Cantina is at 3-7 Delancey Street, London NW1 7NL until early Setember 2015. They're open for dinner Tuesday – Sunday 5pm-10pm and for lunch from Friday – Sunday 12pm – 2pm. Keep up with their news on Twitter @theforgecamden