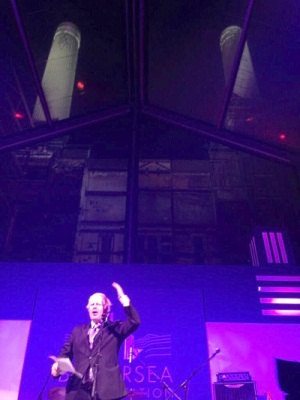 The great and the good (as well as yours truly) gathered in the ruined hall of Battersea Power Station last night to celebrate the publication of the Evening Standard's Power 1000 - a list of London's most influential folk.

Boris Johnson was there to toast the crowd, many of whom he rightly deduced were 'under the influence' as well as being influential. Having delivered a bombastic speech he became uncharacteristically lost for words when we asked him what his favorite restaurants in London were. All we could get out of him was that it was Turkish and in Islington.

We bumped into chef Jason Atherton, there with his wife Irha (pictured below with Polpo's Russell Norman) on a rare night off from his new restaurant Berners Tavern and the refurb of Pollen Street Social. Where was he planning on going afterwards? To Flesh and Buns.

A whole section of this year's list was devoted to the movers and shakers of the London food world. Hot Dinners founder Catherine & Gavin Hanly were on the list for the second year in a row, which this year featured:

To read the list - and find out exactly why everyone made it onto it - go to the Evening Standard Power 1000 page.