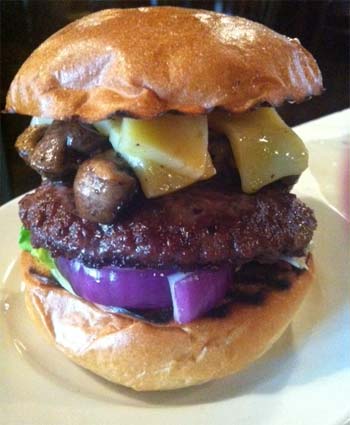 There's an air of mystery surrounding London's latest pop-up The Fattburger Grill Lab. What we do know is that it's a burger spot taking over The Three Compasses pub in Dalston at the weekends. What we don't know - well is almost everything else. The project is run by the mysterious Dr Fattburger who would only tell us that he and his business partner are both Michelin-starred chefs and have more than 25 years of top-flight restaurant experience between them.

Other details we've gleaned from their Twitter and Facebook pages is that the Dalston pop-up is a way to test their menu before they open a full-time restaurant. And that they'll be experimenting with bacon jam, compressed pineapple salsa and kimchi relish.

The pop-up launches this weekend with a burger eating contest - turn up and you'll get entry into the draw to win one of five places and the opportunity to cram as many burgers as possible into your mouth before 10 minutes is up.

On the first night's menu are three burgers - the Fattburger, the Fat Pig and the Meatfree burger - with more to come over the coming weeks.