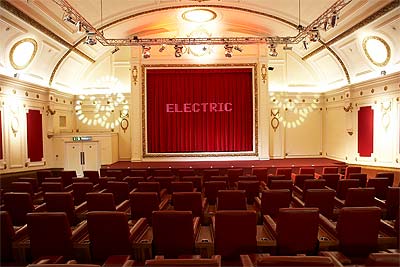 With Odeon's new gastro-cinema The Lounge getting a lot of press recently, it's good to see that another London cinema getting into the gourmet scene.

The Electric Cinema in Notting Hill is preparing to launch a series of special events called Edible Cinema - the next stage up from Odorama. This time, organiser Polly Betton and experimental food designer Andrew Stellitano have teamed up with Soho House Group to bring food directly into the cinema experience. During each film, cinemagoers will be given a number of packages which contain "a whole variety of foods, props and other sensory aids to be experienced throughout the film".

They're kicking off with Guillermo del Toro's WWII period fantasy movie Pan's Labrynth. Cinemagoers will be given a "Pan's Labrynth gin cocktail" to start with but most of the first event is being kept secret. However, we do know that as the protagonists travel through the Spanish woodland, there will be pine popcorn and an infused pine hankerchief to elevate the experience and you can expect some carbonated grapes too. Now, Pan's Labrynth is a tad violent in places so who knows how they'll deal with that, but the whole event does sound fascinating.

More films will follow but things kick off with Pan's Labrynth on May 13. For more details, visit the Electric website.