The Culpeper pub opens in Spitalfields with rooftop garden and more 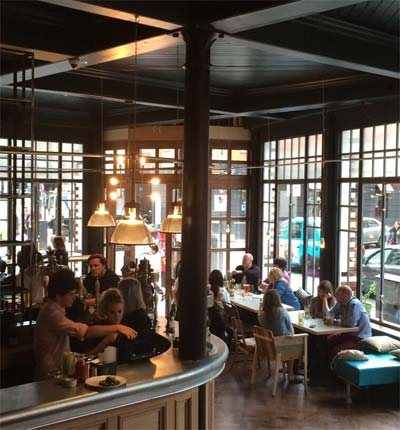 We've always been partial to a party on the roof and now there's a new rooftop in town, as part of a "proper English pub" that's opening in Spitalfields today on Commercial Street just above Aldgate.

Nico Treguer (rooftop growing entrepreneur) and Gareth Roberts (architect) have joined forces with Bash Redford (of Forza Win) to create a pub on top of which all fruits, vegetables and herbs are grown to supply the restaurant downstairs.

It’s taken them 18 months to complete the build, which included stripping back the building to reveal all the old features, reinstating the lightwell and turning the rooftop into their growing space. They are joined by head chef Sandy Jarvis, previously Head Chef at Terroirs. Together they have created a menu that's a mix of traditional British and French provincial cuisine, using ingredients grown on site or sourced from within the UK."

It's an all day restaurant - so it's open for breakfast from today and they'll be launching weekend brunches and Sunday lunches too. We've got a preview of the menu, which includes:

We also like the look of the brunch menu, which includes Harissa Eggs, Mint Yoghurt (£6.50), Spanish Tortilla (£6) and House Black Pudding, Fried Egg & Wild Mushrooms (£8) as well as a Full English for £12.

As for drinks, Alex Orwin (previously of Jonathan Downey's Rushmore Group, who own Milk and Honey) is heading up the bar which will feature lots of local bottles beers and cocktails created with herbal tinctures from the roof.

Of course, they're not forgetting the rooftop at the Culpeper. It's currently hosting a "full-on vegetable farm" and every single dish on the menu will feature something from that garden. There's more to come on the roof, but in the meantime they'll be continuing the Forzawin tradition and will be hosting a series of picnics up on the roof. Starting in mid July, these will happen three nights a week with space for 50 and a welcome drink for everyone alongside a special menu by Sandy Jarvis. Follow the Culpeper Twitter feed for more info as it's released.

There's a lot more promised from the pub later in the year with the promise of rooms to stay in too. We'll have more info about that as soon as we can.

The Culpeper is open now at 40 Commercial Street, London E1 6LP. For more information, follow them on Twitter.