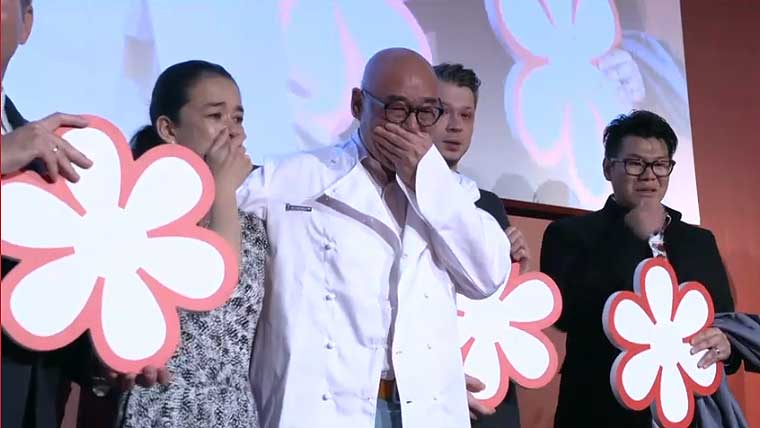 So another Michelin Guide announcement ceremony has come and gone. And it's clear that the huge news is that the UK (and London) has a new three star restaurant. It's been seven years since we last got one when Alain Ducasse at The Dorchester was awarded the full complement. But now The Araki in Mayfair has joined that rareified group.

The UK now has five restaurants with three stars - three of which are in London.

The awards turned properly emotional when Mitsuhiro Araki took to the stage with his family, weeping openly. "I'm so happy and grateful," he said.

It was also a very good day for Claude Bosi who picked up two stars for his restaurant Claude Bosi at Bibendum. Obviously, he'd held two at his previous place, Hibiscus, so expectations were high. "It's fantastic and I'm very pleased. We're relaxed and enjoying what we're doing..." Although he did then point to the MD of the Michelin Guide who was holding up two stars saying - "He's missing one!".

Six London restaurants picked up one star apiece - A Wong, Jamavar, La Dame De Pic, Elystan St, Aquavit and Vineet Bhatia. That's less than last year's eight. "It's lovely to win this incredible award in a country that has such incredible Chinese food," said Andrew Wong while Phil Howard praised his move to Chelsea's Elystan Street. He said this "has given me a less challenging environment to let the ingredients sing. This time 18 months ago I thought I'd successfully put myself out to paddock...it's wonderful."

"It's very important to us - we're very, very touched," was chef Vineet Bhatia's take on the award. And The Square regained the star it lost last year.

Racing driver Amanda Stretton presenter kicked off the central London event today praising the Michelin star as "an award that has become a benchmark across the world for quality, consistency and independence."

"Being in the guide is an indisputable business asset," said Michelin's head of communication. "Today we have with us the most talented chefs of Great Britain and Ireland." And certainly, there were a lot of top chefs in attendance, including Claude Bosi, Phil Howard, Nathan Outlaw and James Knappett.

The first award to be given out was a special Welcome and Service award and that went to Kitchen Table which won for the harmony between its kitchen and front of house. "Talk about a well-oiled machine".

New one stars for the UK and Ireland

As for star losses, only Dabbous was mentioned as losing a star (it's closed) although Pidgin was surprisingly missing from the actual guide.

This echoes last year's presentation when the star for Pidgin wasn't announced either - mainly due to their chef leaving in between the star being assigned and the guide being produced (a chef's departure usually leads to a review but there was clearly no time).

There was a similar quiet treatment of The Square at this year's announcements which regained its star despite imminently getting a new chef.

The 2018 Michelin guide - who won and why they're rated