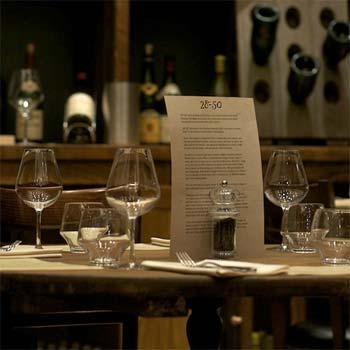 The pair behind Michelin-starred restaurant Texture have announced plans to expand their wine-bar offshoot 28°-50° to Marylebone this summer. Agnar Sverrisson and Xavier Rousset - chef and sommelier respectively - will open their second bar on Marylebone Lane in early June. The first 28°-50° opened on New Fetter Lane back in 2010 and has carved out a name for its focus on introducing customers to new and interesting wines, running tasting events throughout the year.

Hot Dinners caught up with them both this week to gather more details about the new bar.

What made you decide to open another 20:50 and why Marylebone?
The first site has proved so popular, it really has exceeded our expectations, so we are keen to see if it will be as successful elsewhere. We have always loved Marylebone, and the clientele in the area.

How will the new 28:50 differ from the original?
It will have a more contemporary feel with lots of glass used in the design, almost floor to ceiling in places so there will be a lot of natural light.

What's being planned food-wise for the new location and who's going to be running the kitchen there?
There will be a slightly larger menu and we will also offer a pre-theatre menu too. The kitchen will be overseen by Aggi and 28°-50°’s head chef, Paul Walsh. Sample dishes will include plum tomato gazpacho with prawns, olives, basil and extra virgin olive oil, Cornish lemon sole with Jersey royal potatoes, tartar sauce and brown parsley butter, and Valrhona chocolate tart with milk ice cream.

And finally, when are you looking to open - and is the start of an empire?
Early June. We’re focusing on this opening but if it is successful we would consider opening more, always in a considered way.