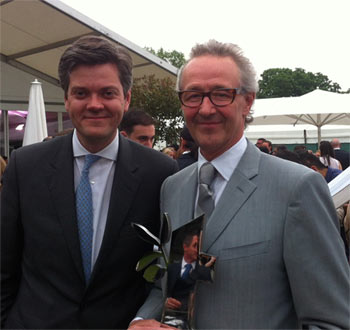 Just as Taste of London was getting ready to kick off, we went to the the launch party last night where the awards were given out for the food festival's best dishes. Chefs and press mingled as we previewed some of the dishes and prayed for the rain to hold off.

The awards were as follows...

Baccarat were on hand too, handing out some wine awards including one for "Best Restaurant Wine List" to Hot Dinners' favourite spot Bar Boulud.

As this is Taste's 10th anniversary, there were more than a few familiar faces at last night's party including Olympian Victoria Pendleton and Liberty X's Michelle Heaton.

We also bumped into radio presenter Richard Bacon who told us just how Nick Jones came to open Pizza East, Chicken Shop and Dirty Burger in Bacon's Kentish Town manor. It apparently took a concerted campaign from him and fellow Kentish Town resident Giles Coren to persuade Jones to open up in their neighbourhood. "Giles and I took him round all the local places - The Bull and Last, The Southampton Arms and The Pineapple to persuade him it was a good idea," Bacon said.

Taste of London kicks off today. If you're heading along, make sure you check out our handy guide first.