[SIGPLUS_EXCEPTION_SOURCE] Image source is expected to be a full URL or a path relative to the image base folder specified in the back-end but /blog/2013/taste-london/gallery is neither a URL nor a relative path to an existing file or folder.
0
Shares 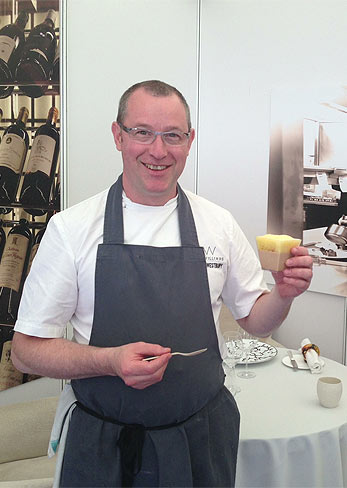 It may be raining as we write this, but for the first time in years, we spent a day at Taste basking in the London summer sunshine rather than dodging the showers. Although there seemed to be more people than ever pouring into the event, they must have rearranged the layout somehow as nowhere seemed to be too packed.

With just four hours to see as much of Taste as we could, our first stop was Duck and Waffle, here at Taste for the first time and doing apparently storming business with their ox cheek doughnut, one of the more popular items of the festival.

From here we swung by Bar Boulud - which was mobbed every time we passed - to try two of their dishes, a BBQ pork slider with red cabbage slaw and jalapeno mayo (8 crowns) and a frankly gorgeous lobster roll with old bay mayo and pickled cucumber (18 crowns).

Time for a quick dessert - and Alyn Williams told us that he'd already sold shedloads of his caramelisd white chocolate pannacotta with honeycomb and a passionfruit foam (6 crowns). No wonder - this was one of today's standout dishes for us.

Taste sponsor British Airways has a number of stands and VIP rooms at the festival - and judging from how quickly spaces get taken up at their Height Cuisine stand - it's worth stopping by here first on your way in to put your name down. They've mocked up a Club World cabin where they're serving up afternoon tea and dinner completely free - you even get hot towels on your way in and a Club World washbag to take away with you.

We had the most fun sitting down to a mozzarella taste test with the ebullient Ryan Hattingh of Obika. He brought out the most massive mozzarella plait for us to try - which drew crowds of foodies wanting to take pictures of it. Obika fly their cheese in from Italy three times a week - we tried their mozzarella, smoked mozzarella (which is smoked over hay) and some amazing burrata stracciatella - all washed down with plenty of Prosecco. They're doing tastings all through the festival - so do seek them out.

Other dishes we tried today included: pine-smoked 'lovehearts' aka duck hearts with oyster tapioca pearls (8 crowns) and a great foie gras and truffle burger (14 crowns) from Club Gascon - their chef Pascal Aussignac won Best in Taste the past two years in a row and these are both worth having. The duck and oyster was probably one of the more innovative dishes we tried here this year.

We also tucked into some fettucine with wild mushrooms, Grana Padano Riserva and an almost unseemly amount of black summer truffles shaved all over it from L'anima (24 crowns) and - another must-have dish from Launceston Place - the scallipop of teriyaki dipped scallop and free-range pork belly served with white and black sesame pork popcorn (20 crowns). As good as it sounds.

If you want to see more - take a look at our gallery below - and don't forget to check out our Guide to Taste of London 2013.