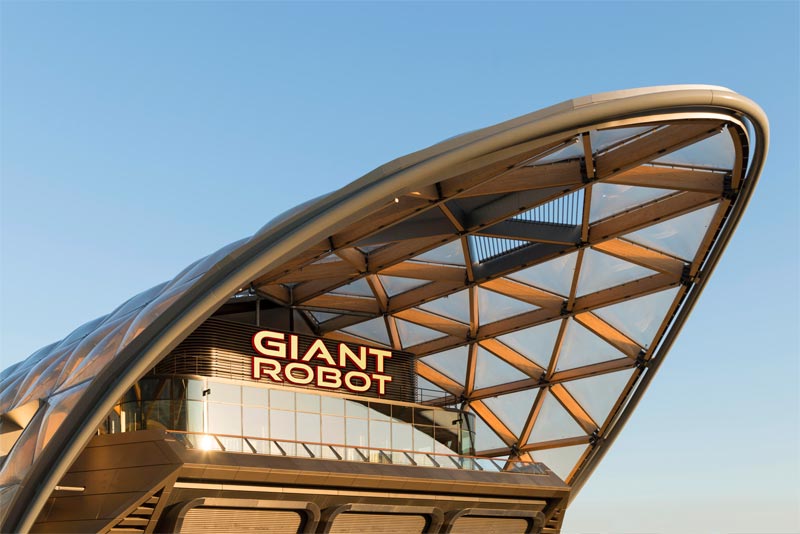 In a nutshell: A new eating and drinking arena in Canary Wharf

Summing it all up: Street Feast are behind this brand new ‘rooftopia’ opening in Crossrail Place, and they’re bringing in in Jose Pizarro, Yum Bun and Thunderbird, among others. There’ll also be a 360° view bar, and loads of beer on tap.

If you’ve been wondering about the strange construction slowly emerging from the scaffolding around Canary Wharf, your wait is over. Giant Robot, a new building from Street Feast, is a brand new food arena opening at Crossrail Place, which will play host to a healthy selection of London street food vendors, bars and then some.

City workers out east will now be able to head to Giant Robot for a spot of lunch or dinner, and there are quite a few options to pick from. First up there’s Little Jose, a miniscule version of Jose Pizarro’s tapas bar, where there’ll be sherry, crispy fried squid and prawn fritters with lime mayo, or fried chicken burgers and more from Thunderbird. Yum Bun will also be making an appearance with their fluffy bao, while seafood will be represented by BOB’s Lobster, including Ahi Tuna Tacos.

However, the most obvious standout feature Giant Robot possesses is how it looks. With its giant metal frame and retro font sign, it does its sci fi-esque name proud with its sort of ferry/spaceship/robot appearance (plus who hasn’t wanted to say to their friends ‘meet you at the Giant Robot’?). It’s also been specially built to include a roof garden called the 360° Island Bar, which will allow punters to take in great views of the surrounding areas - not to mention 38 beers on draft.

Giant Robot will be free to enter, and open all week long, making it Street Feast’s first seven-day-a-week venue.

Where is it? Crossrail Place, London, E14 5AR

When does it open? 12 April