Spit & Roast popping-up at the Princess Alice on Commercial St 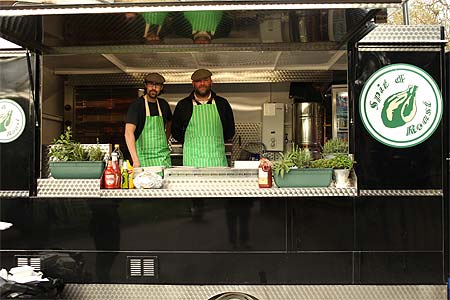 The chicken craze shows no signs of slowing down and now one of the first people on the scene are getting ready to pop up in an East London pub.

Spit and Roast is run by Justin Unsworth and Ross Gardner (who were formerly owner and chef at Medcalf on Exmouth Market) who have been inspired by the market rotisseries of France and Italy. Selling from their food truck, they are known to many as purveyors of the finest rotisserie chickens. You can see them at London's top street food gatherings including KERB and Brockley Market selling their extremely popular buttermilk fried chicken. Now they'll be setting up shop in the Princess Alice on Commercial St every Thursday to Sunday where that buttermilk chicken will be the primary focus on the menu, but with loads more added too.

So, the regular menu will include starters of buffalo wings with Stichelton dip (£4.50), chiccarones ("a Costa Rican delight of cubes of twice cooked - slow roast then fried - pork belly") with apple sauce and watercress (£4.50) and oxtail toasts & endive (£5). The mains will focus on the chicken with two pieces of Buttermilk fried chicken, one side, gravy (£8), a buttermilk fried chicken bap, apple & celeriac slaw (£7) and also Blythburgh pork belly & stuffing bap with bbq sauce (£7). Sides will include mac & cheese, grits and greens while there will be brownie & vanilla ice, coffee cake and cheesecakes for dessert.

On Sundays, their truck Bessie will be pressed into service for roasts from the spit. So there will be Blythburgh pork loin, apple sauce, crackling (£13) or half Banhams Suffolk chicken with stuffing (£13) both served with roast potatoes & carrots, seasonal greens and "proper gravy".

The pop-up starts on Thursday November 22nd at the Princess Alice on 40 Commercial Street, London E1 6LP. It will run for about four months (although this may extend) on every Thursday, Friday and Saturday from 6-11 while the Sunday roasts will be from 12-2 and 2-4.