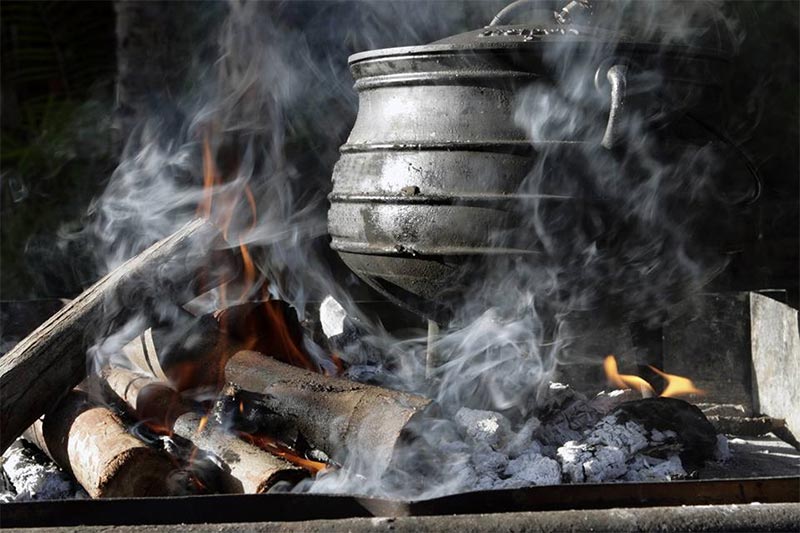 A taste of South African barbecue, Hammer and Tongs, is coming to Farringdon Road with a braai grill that’s a whopping 3m in size, and a menu bursting with local ingredients.

We’re not going to lie - it’s rare we need to run to Google *quite* so many times when looking at a menu, but Hammer & Tongs gave us a run for our money, highlighting how woefully under-represented South African food is in London. There’ll be confetti bush, balderjahn, garlic buchu, roosterkoek, and blatjang, and a whole host of other intriguing mystery foods native to Hammer & Tongs’ homeland.

The menu is split up into two: cuts and steaks, and skewers, and is priced accordingly. After you’ve started off with some roosterkoek bread or braai-pot baked bread, and you feel like splashing out, go for the upper end of the scale with their 700g t-bone which and comes with a reblochon and tarragon gratin, with smoked buchu and monkey gland sauce (a fruity chutney unrelated to our simian cousins). Or try the whole tile grilled trout with lemongrass, West Cape aromats, basil oil and lavender.

Down on the other more affordable end of the scale, there are the skewers which will be available as whole or half portions. Try the Arctic Spruce-salted monkfish with confetti bush and aji panca pepper, or blackened lamb sosaties, glazed tiger prawns with green papaya and garlic buchu.

Fans of barbecue know that what you cook your food over is of utmost importance when it comes to flavour; something Hammer & Tongs are all too aware of, so they’ll be importing special Sickle Bush wood from Namibia and South Africa for that super-authentic flavour. It’ll be used in the massive braai which will be cooking up the majority of food on offer, and all in full view of the diners.

For drinks, there’s plenty to get excited about as well. The cocktail menu is curated by Pete Kendall of Milk and Honey, and Trailer Happiness, and it too contains quite a lot of mysterious ingredients, including a Stellen-Spritz pallet cleanser with caperitif rosso, Graham Beck sparkling wine and wild jasmine syrup, or the Veldt Smash, with something called ‘H&T Veldt Grog’. The ice for your drink will be cut from a huge piece of ice on the bar by a hot copper pipe, so even aside from their custom braai, the whole setup is guaranteed to be pretty impressive.

Hammer & Tongs opens for their soft launch on 28 November at 171 Farringdon Road, London EC1R 3AL. They’ll be offering 50% off food until 4 December, and open every day from 11am - midnight. Follow Hammer & Tongs on Twitter @hammerandtongs or on Instagram @hammer_tongs.