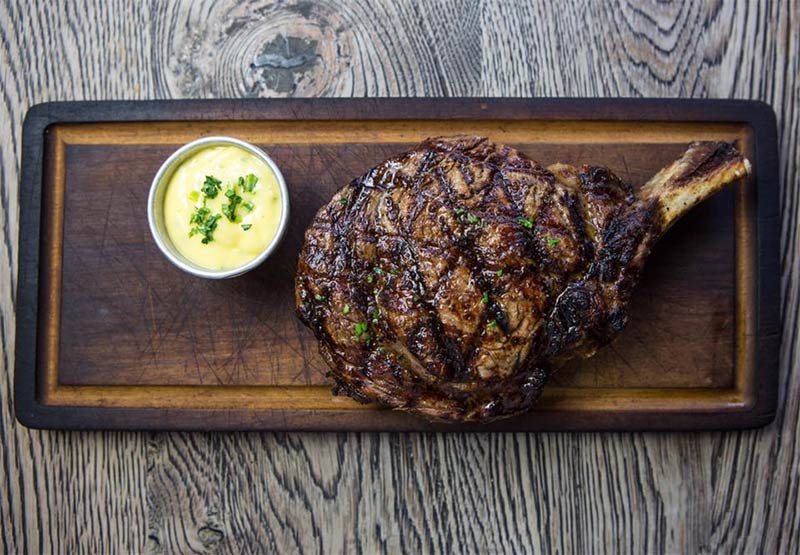 In a nutshell: Steak, fish and veg in an iconic Soho cinema.

Summing it all up: It’s been 15 years since Sophie Bathgate and Rupert Power set up their Chelsea steakhouse inspired by the steakhouses of New York. Now they’ve moved to Soho’s iconic Moulin Cinema for a huge new project, where there’ll be an onsite butchery to dry age the beef, a 2.5m tall infiernillo grill and "American-sized" martinis.

It’ll be quite the undertaking, with an all-day restaurant, a separate steakhouse, a bar, *and* a take-out kiosk as well, all tucked in and around the now renovated cinema, complete with vaulted ceilings and a covered terrace.

Food will be similar to offerings at their Chelsea premises, but “more sophisticated...with the same care for the finest ingredients,” according to co-owner Rupert Power.

First up, the beef. It’s no surprise that as a steakhouse, Sophie’s is taking their beef damned seriously, importing it from their family farm in Oxfordshire then dry-aging it for a month in the new restaurant’s on-site butchery. There’ll be cuts like Axe Handle Ribeye, Double Entrecote, Chateaubriand, and Porterhouse available by weight, or you can go for something a bit less full on, like a chargrilled rump steak sandwich with hot mustard.

Loads of it will be cooked over their huge (2.5m tall!) cast iron ‘infiernillo’ grill, which you’ll be able to spy if you have a seat close to the open kitchen.

Another unique aspect of the new Soho venue is that the restaurant aims to devote the same amount of attention to fish and veggie options as to the meat, which means there’ll be charred eel, turbot with sorrel butter or “scallops from the fire”.

There'll be a well stocked cocktail bar, that we're happy to say will have a menu dedicated especially to their "American-sized" 10oz martinis.

Speaking about the new venue, Sophie’s co-owner Rupert said: “We’re notoriously picky about sites. We have to have an emotional reaction and essentially fall in love with a building.”