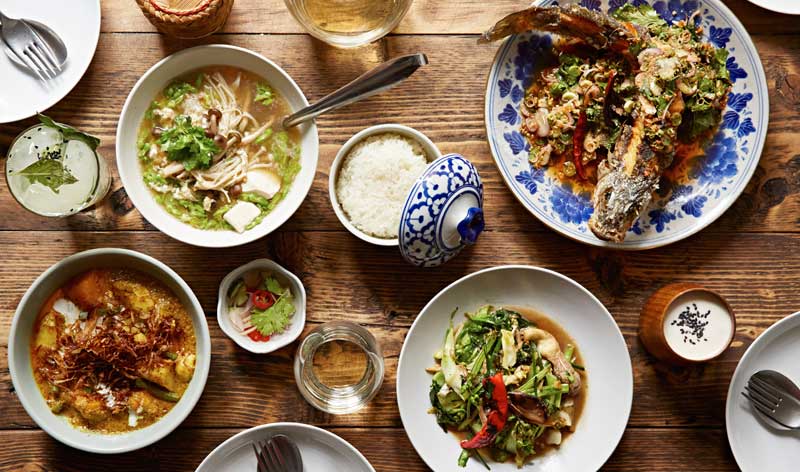 It’s no secret that we’re fans of Som Saa, London’s much-loved Thai spot. So it’s welcome news that they’ll soon be staying open even later these coming weeks as they begin a series of Late Night Sessions.

The nights will see Som Saa putting their international partying know-how to good use as they stay open until 1.30am, keeping the grills going to feed hungry punters and supplying lots of Thai beer, as well as Thai brews from Singha Beers.

Diners will be able to keep themselves fuelled up for the night with a selection of Thai street food classics that Som Saa will be churning out throughout the evening. There’ll be Khao Pad Naem, with fermented pork and fried rice, or Pad Grapow Gai with chicken, holy basil, crispy egg and no doubt loads of chilli - Som Saa isn’t known for its mild approach to spice. There’ll also be a green papaya salad with salted duck egg on the side, or Laap Pla with minced fish, a specialty from the north of the country.

If you fancy a change from beer, try a Muay Thai Kick cocktail with Thai basil, lime leaf, basil seeds and gin, or the Krahang Old Fashioned which blends sandalwood smoked bourbon with palm sugar gomme and mandarin peel.

Music should be exceptionally decent as well, which is always a huge plus in these scenarios. The line up feature DJs from NTS Radio, London nightclub Corsica Studios, plus some eclectic vinyl mixes from On The Corner Records.

The whole thing is bound to conjure up the vibe of Bangkok’s notorious party street, Khao San Road, and those with enough staying power will be able to enjoy the ultimate in regrettable late night holiday drinking: ice buckets with Thai whiskey and soda.

Som Saa is at 43A Commercial Street, London E1 6BD. The Late Night Sessions take place on Saturday 4 February, 4 March, 1 April and first Saturdays of the month after that, from 11pm - late. Follow Som Saa on Twitter @somsaa_london and Instagram @somsaa_london