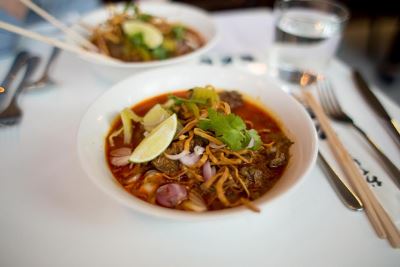 The past few years have definitely proven that there is no set path to follow when opening a restaurant. A preferred option now for restaurateurs in waiting is to run a series of events which allows for the testing of dishes to gain valuable feedback ahead of opening their doors. In the case of Som Saa, this is exactly what the owners have in mind.

Headed by Andy Oliver, an ex-Nahm Chef and Tom George, a manager at Goodman Mayfair, Som Saa aims to serve 'great Thai food which uses a combination of quality British and Asian produce.'

Hot Dinners can exclusively reveal that the Thai food concept ‘som saa’ will be setting up at Climpson's Arch later this month bringing a range of authentic dishes from this broad and under-represented cuisine, directly to Londoners. Som Saa Thai bar and restaurant will open on the 25th October and run until early next year.

Andy Oliver & Tom George, the duo behind Som Saa has worked extensively on both the food and drink offer. Their aim is to showcase a unique series of drinks and dishes selected from this broad cuisine. Whilst continuing their search for a permanent restaurant site, they will use the indoor space at the Arch to create a relaxed atmosphere, where groups both small and large can experience interesting regional Thai food.

Andy, the chef has built a deep understanding of Thai cooking, working for David Thompson at the London outpost of Nahm, in Thailand for cult restaurant Bo. Lan and most recently at The Begging Bowl in Peckham. The regularly changing menu at the Arch will be made up of a selection of bar snacks, small plates, salads and larger dishes. Som saa will also be open for brunch in the weekends, which will see a few Thai brunch dishes added to the menu along with small batch Thai coffee, specially sourced by Climpsons.

Meanwhile, Tom overseeing front of house has drawn upon his extensive experience managing and running restaurants and bars to develop a unique drinks list to specially match the style of food coming from the kitchen.

A few of the drinks to be served include:

"I can't wait to get some Thai food cooking on those charcoal grills," Andy told us. "I’m particularly excited about the dishes from the Northern and North-Eastern (Isaan) regions, which, though they sound like they are the same place, are quite different both in terms of location and style. This residency also represents a big next step for som saa, before we take on permanent premises."

Som Saa at Climpsons starts 25 October 2014 and will be open Thursday - Sunday from 6pm with brunch at the weekends. For more updates about som saa at Climpsons Arch, follow them on twitter @somsaa_london