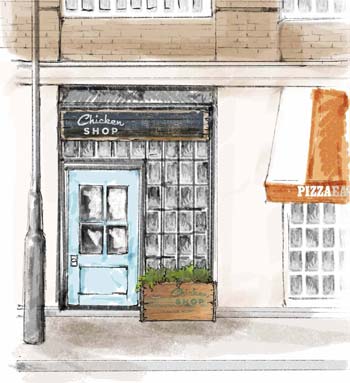 We've known for a while that Soho House was planning to open a new Pizza East in Kentish Town (surely a Pizza North?) but what really caught our interest at the time was the promise of a brand new venture, Chicken Shop, that was to open downstairs. Well, now Hot Dinners can exclusively share what's planned at the new restaurant...

Opening in September, Chicken Shop will take up the basement underneath Pizza East Kentish Town. Taking advantage of the current restaurant trend of focusing on a simple idea and doing it well (kicked off by Burger and Lobster), it's dedicated to selling rotisserie-style chicken and has been a pet project of Soho House CEO Nick Jones. He said “I’ve been thinking about this for a long time, chicken would be my last meal and so I wanted to get it exactly right. The best chicken is the one you cook at home. We’ve tried to recreate that, but affordably.”

The chickens, sourced from Banham’s farm in Norfolk, will all be marinated overnight using a specially developed recipe and steamed to lock in flavour and to keep the meat succulent. Just before serving, the whole chickens will then be transferred to the bespoke rotisserie grill to be cooked over charcoal and wood, resulting in "juicy, perfectly cooked meat and crispy skin". Yes, we're drooling over the sound of that too.

Chicken will be the only main course available in the restaurant and it'll be served quartered, halved and whole. As for sides, they're equally streamlined with triple cooked chips, creamy coleslaw, corn on the cob and salad being the only dishes to order.

The look of the restaurant is designed to mimic that of a 1950's American general store and will seat 40 people with takeaway available too.

Chicken Shop will open on Highgate Road in Kentish Town in September.