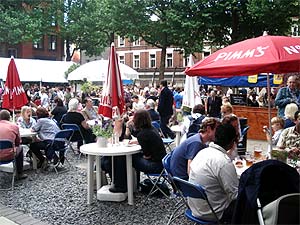 Last year's inaugural Soho Food Feast was a standout success, bringing together chefs and restaurants from London's most vibrant food quartier (despite what Aldo Zilli thinks) to raise funds for the area's state primary school.

This year the event, which is co-created by Fergus Henderson's wife Margot Henderson (who runs Rochelle Canteen), is back and better than ever. "It'll all be delicious," she enthuses. "We have lots of gorgeous chefs and we've got a few people doing demonstrations. It's a good place to try a lot of restaurants in an afternoon - it's like a village fete."

Hot Dinners persuaded Margot to give us a few details on what's going to be happening on the day. So we can tell you that Ben Tish of Salt Yard will be giving a demonstration, as will Margot and Fergus themselves, who will be cooking pizzoccheri and steamed mussels. Jacob Kenedy of Bocca di Lupo will also be giving a demonstration. Salt Yard will be preparing milk fed lamb ribs at their stand, to be served with with two sauces - picada and sabixada. And Wright Brothers will be serving their signature oysters at their stand, as well as mini crab rolls not usually available at their restaurants.

The 2012 Soho Food Feast will take place in St Anne’s Church Garden, Wardour Street on Saturday 26th May from 12pm to 5pm. You can buy tickets in advance from the Soho Parish Primary School for £4.00, online for £6.50 from http://sohofoodfeast2012.eventbrite.com/ or for £10 on the day, depending on availability.