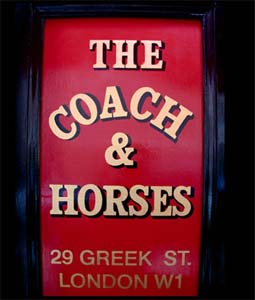 If we were going to take a punt on the first London pubs to turn fully vegetarian, it's safe to say that we'd never have picked one in Smithfield market or a legendary Soho boozing spot to be among them. But Alastair Choat, owner of Soho's Coach & Horse and The Smithfield Tavern, has just announced his plans for them both to be full vegetarian/vegan. A founding menu of the Sustainable Restaurant Assocation he's hoping people will look beyond the "hole on the plate where the meat should be".

Head chef, Lahiri Gregorio Balloni was previously at Manna, Primrose Hill which bills itself as the oldest vegetarian restaurant in the UK. He's worked on the menus for both pubs. Starters at the Coach & Horses include raw Lasagne (wafer thin marinated raw golden, candy and red beetroot, courgette and beef tomato layered together with cashew cheese and raw pizzaiola sauce) and Tofush & Chips (tofu covered with seaweed nori, coated in organic ale batter and served with root vegetable chips). Two courses are £14.95.

Over at Smithfield, you can have an Open Sandwich for £4.95 of mixed tomatoes with herbs and topped with crumbled English styled feta or sausage beans and mash using handmade sausages made with carrots, parsnips, courgettes, cheddar cheese and almond flakes and deep fried till crisp (£7.65).

It's a brave choice, but we're not sure how many meat market porters are going to want a beetroot tarte tatin rather than a bacon sarnie after their early morning shift...