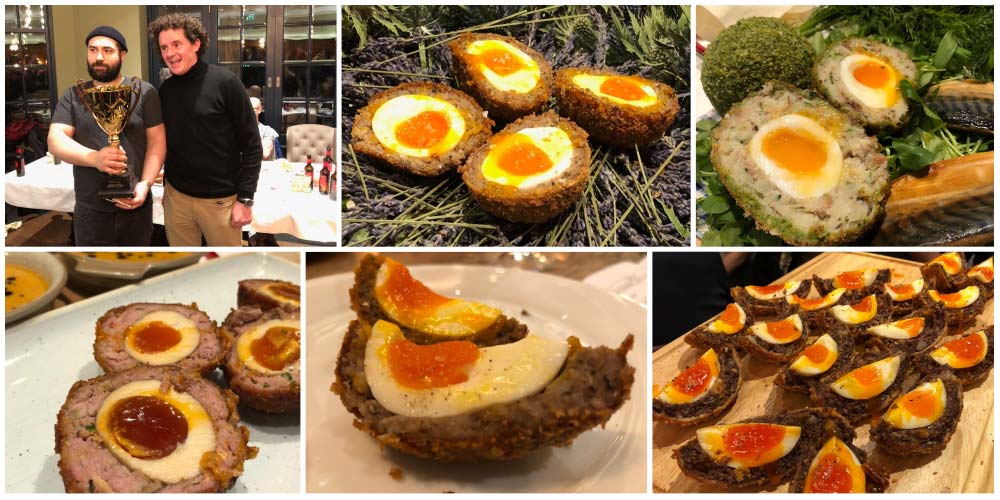 Islington pub The Canonbury Tavern was packed out last night with chefs and foodies all keen to discover who would be turn out this year's winning entry in the 8th Scotch Egg Challenge.

23 restaurants and gastropubs were in the running this year and the judging panel facing all those eggs were new Sunday Times Magazine food editor Lisa Markwell, Guardian and New Statesman writer Felicity Cloake, Restaurant Magazine editor Stefan Chomka and Bob Granleese - food and drink editor of the Guardian's Weekend magazine.

We had merguez and harissa eggs from Tredwells' Chantelle Nicholson, a tea-pickled egg with a Scotch bonnet kick from Nanban's Tim Anderson and even - heaven forfend - a vegan Scotch egg from Boma Restaurants, which turned out to be a baked potato in disguise.

But there had to be some winners. In joint third place was Nanban and Star Inn The City from Yorkshire. Second place went to The Drapers Arms with a pork, chilli and fennel egg. And the big trophy of the night was carried off by Smoking Goat whose Saffron egg, Tamworth pork and fermented crab was judged to be fully worthy of the title.

We'll leave it to the Holborn Dining Room's Calum Franklin to round up the evening.

Man even if you come away empty handed, the #ScotchEggChallenge is such a wicked night. Well done for another cracking competition @TheCanonbury @McMoop @YoungsPubs 🙌