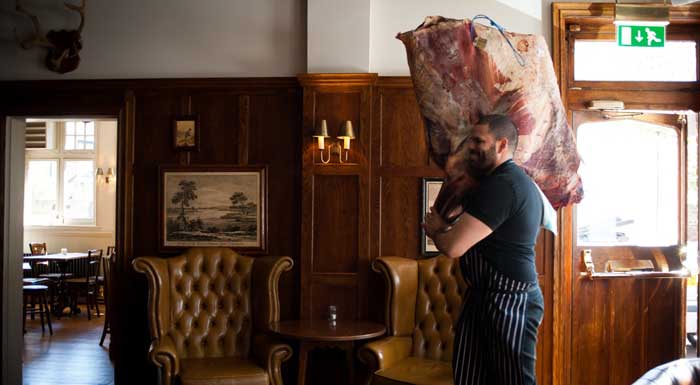 City carnivores should look out for a new restaurant launching this Autumn. Little Smoke is from the team behind Smokehouse, The Pig and Butcher, and The Princess of Shoreditch. And it's ALL about meat - in particular native and rare breed meat. It's taking over the Bad Oeuf site in Citypoint.

The idea is that all the meat for the restaurant will be sourced from small independent farmers before being butchered on-site at sister restaurant Smokehouse and then taken into the City to Little Roast for roasting smoking and grilling. "It's like a big version of the specials board at Smokehouse Islington," explain husband and wife team and Noble Inns founders Scott Hunter and Maria Larsen.

The menu will change daily, depending on what's been butchered for the day. So you might get anything from a bavette steak or pork belly to huge sharing cuts like a dino rib, whole beef shin or even a Tomopork.

To help chow down on all that meat Little Smoke will be making its own condiments, including Beer Mustard, Aged Beef Mayo, and Gochujang mayo and side dishes such as Burnt and Crunchy Sweetcorn with anchovy and apple salsa verde or burnt chilli greens.

And if you don't have the meat sweats after devouring all that there will be s short dessert menu featuring dishes like rum baba and chocolate hot pot with melted marshmallows and clotted cream ice-cream.

The wine list sounds every bit as interesting with a lot of small producer, organic and biodynamic wines including a Chardonnay from Kent’s Hush Heath Estate and two English sparkling wines from Balfour and Coates & Seely. There'll also be craft beers and classic cocktails too and a small space outside for alfresco dining.