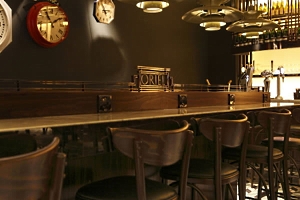 In an interesting move, the Oriel restaurant which used to take pride of place on Sloane Square until its lease was abruptly terminated by disgruntled landlord Lord Cadogan, is now moving to a new site...at Heathrow Airport.

The 115 cover brasserie opens airside at Heathrow Terminal 3 today serving up an all-day menu including many of the dishes it had on when it was in Chelsea, so expect to see Oeufs Royale, Omelette Arnold Bennett and pain perdu.

A Heathrow spokesperson said: “We are really excited to be able to offer our Terminal 3 passengers something a bit different by bringing an interesting brand like Oriel to the airport. We’ve been working hard this year on improving facilities and choice in Terminal 3.

The Oriel's former site in Chelsea has now been taking over by Rex Restaurants - the people behind the Wolseley and Delaunay - who have plans to open an all day cafe there over the coming months.