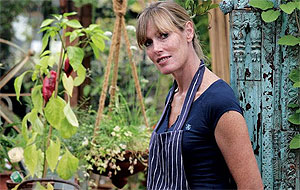 There's a fascinating piece in Sydney newspaper The Age, published this weekend, in which Petersham Nurseries head chef Skye Gyngell gives her then-PR team a headache by calling the Michelin star she won last year 'a curse'.

Gyngell who just days before the Age piece was published, announced that she was leaving Petersham (to be replaced by Melbourne chef Greg Malouf), talks frankly about the expectations diners appear to have from a Michelin-starred establishment.

"Since we got the star we've been rammed every single day, which is really hard for such a tiny restaurant. And we've had lots more complaints," she said. "People have certain expectations of a Michelin restaurant, but we don't have cloths on the tables, our service isn't very formal. You know, if they're used to eating at Marcus Wareing, then they feel let down when they come here."

Although Gyngell goes on to say she thinks it's "amazing of Michelin to relax the rules about toilets and napery and everything and reach out to places like this" she does add that "we just want to get on with what we do: producing fresh, seasonal food with love and respect for the best ingredients."

It turns out that Gyngell also asked for the Michelin star to be taken off the restaurant's website. "I just don't want to show it off and give people the opportunity to complain that we don't reach what they think are Michelin standards. If I ever have another restaurant, I pray we don't get a star."

The article's a particularly interesting read when you know that Skye is no longer at Petersham. Asked whether she'd ever like to open her own place she admits to dreams of a "white, sleek, contemporary" new place in a central London spot. As to whether she has the money to open up on her own her response was: "I'm not a business person, am I? No. But I do know how to make a restaurant, so I'd have to get investors, obviously, and surround myself with people who understand my faults and fragilities."