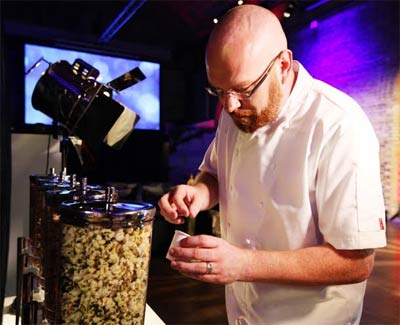 British Airways is launching its Summer-long rooftop cinema on May 1st and it's brought in regular partner Michelin-starred chef Simon Hulstone to provide the popcorn.

He'll be producing "Chim Chimney" popcorn which is, of course, based on Mary Poppins. According to Hulstone "I use burnt onion ash to represent soot, which is surprisingly sweet and combined this with cheese extract to create the moreish taste - along with a spoonful of sugar of course! It conjures up images of chimney sweepers, London rooftops and the nostalgia of everyone’s favourite childhood film."

The popcorn will be available alongside the opening night of Saving Mr Banks on May 1st. For the rest of the summer there'll be over 170 films to choose from including Anchorman 2: The Legend Continues, Top Gun, Reservoir Dogs, Casablanca and The Lego Movie. Munch your popcorn as you watch in luxury comfy chairs, blankets and wireless headsets.

Rooftop Cinema is at either the Bussey Building in Peckham Rye or the Queen of Hoxton in Shoreditch from May 1 to September 30. To book that or any other night throughout the summer, go to their website.