Seven courses of wallpaper-themed dining awaits you in Soho, courtesy of Pedro Passinhas 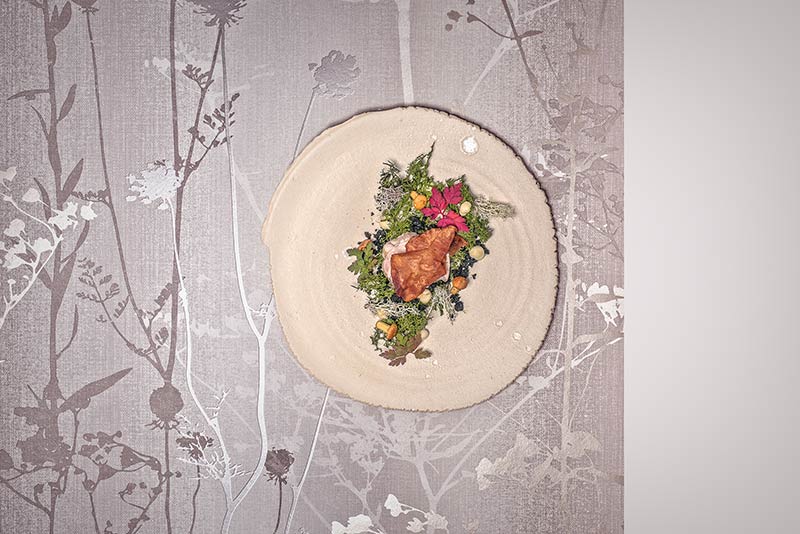 Off the Wall & Onto the Plate sounds a bit Willy Wonka-esque if you ask us, but that’s the name of a new ‘decor-inspired’ pop-up coming to Soho’s The House of Wallpaper. So yes. The menu is entirely inspired by wallpaper. All seven courses of it.

But what, exactly, constitutes food that is wallpaper-esque? Leave it to experimental chef Pedro Passinhas who’s managed to dream up some genuinely weird creations that run with themes of “taste, texture, colour and pattern”.

Some of the dishes he’ll be presenting include his ‘sheet scallop’ made with slow-cooked pork neck and metallic paper made from fresh oysters. “The idea was to replicate the scrunched up effect of the paper by developing the scallop “sheet” and folding it onto the plate,” he explains on the website.

There’ll also be ‘Twigs’ - a crispy mushroom snack with creme fraiche that replicates the pattern on Graham & Brown’s Wallpaper of the Year 2018 by “serving a crispy fried cracker shaped like twigs.” Fair enough.

“Cooking is an art form and a means of expression, and so is home décor,” said Pedro. “Bridging the gap between wallpaper and food was a challenge, but we’ve managed to translate the patterns and textures onto the plates while keeping the menu delicious, locally-sourced and seasonal.”

It’s not a million miles away from the chef’s 2016 project, Denim N’ Dine which served haute cuisine out of a still operational denim factory in Walthamstow.

If you’re curious (and believe us, we’ll understand if you are) then you should know the pop-up only runs for 12 days, and a seating will cost you £60. However if you’re a lover of the weird and wonderful branch of fine dining, then it sounds like a very memorable evening out indeed.