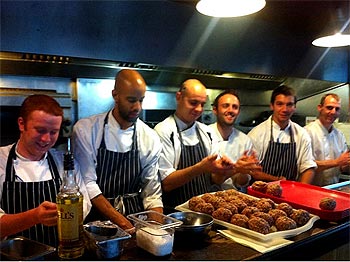 Always a super popular event - see our account of last year's action - the annual Scotch Egg Challenge will take place at The Ship in Wandsworth on Tuesday 17th September.

All eggs will have been tested in the Ship's kitchens before shortlisted entries go to a panel of committed food experts (we're going to avoid the obvious pun - you can thank us later). They'll then judge them in a blind tasting on the night.

There is one rather large change to proceedings this year as all entrants will be invited to donate a dozen of their lovely eggs to a 60-hour online auction in aid of Action Against Hunger. All proceeds will go direct to the valuable work the charity does in some of the world’s poorest countries. The full list of entries for the egg auction are listed below. The auction goes live at www.scotcheggchallenge.org on 17th September and ends on 20th September 2013.

And if you'd like to watch the proceedings, head along to the Ship on the night where the bar will have a live video feed from the judging area and you'll be able to order the Ship's scotch egg to try.

And also in the auction: