[SIGPLUS_EXCEPTION_SOURCE] Image source is expected to be a full URL or a path relative to the image base folder specified in the back-end but /blog/2014/sawyer-gray/gallery/ is neither a URL nor a relative path to an existing file or folder.
0
Shares 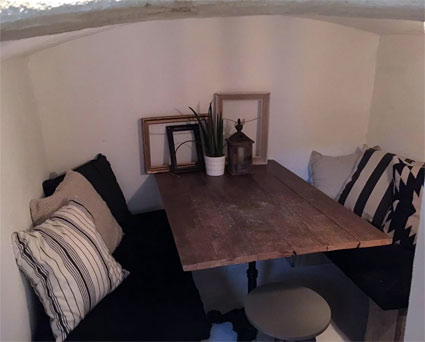 As regular readers will know, Hot Dinners hails from Islington where we are always on the look out for new restaurants and bars opening locally (alhough we're always ready to hear from you about new openings in your local area too). So we were cheered by the sight of a great looking cafe opening right on on our doorstep this week - Sawyer and Gray.

It's one we've been watching take shape for a while, next door but one to another Islington success, LeCoq. Ever since their renovation work revealed a long-hidden signage on the front - which dates from the 1940s and since became the name of the new café too - it's been a building that's really stuck out in the area. So we were very pleased to see that the inside of the cafe looks every bit as impressive as the 1940s frontage (our photos, alas, don't do it justice). Peek behind the distressed coffee bar at the front and there are tables stretching back and more seating in the downstairs basement - the ex coal-hole cubby holes looked particularly inviting.

We caught up with owner Darren Chester, who used top run a coffee shop in London before moving to Italy to restore villas - something which came in handy with this challenging building project. Now he's returned to partner with old friend Marco Pessina (in his words "combining the talents of North Yorkshire and Italy) for this new cafe which they're first and foremost aiming towards Islington locals. They'll start off serving simple cafe food - sandwiches, antipastis, pastries and more - while they develop the menu with their chef on the basis of local feedback. The menu is clearly being developed at the moment (we snuck a look at some dishes being tried out in the downstairs kitchen), but something of a closely guarded secret while they test different dishes over the next few weeks.

It'll also open all day long, from 7.30am - 11.30pm, and they'll be serving a short wine list too (bottles between £18 and £30) alongside Menabrea and Meantime beer. And, given the Italian influence, there's Prosecco by the glass as well as Climpsons coffee.