[SIGPLUS_EXCEPTION_SOURCE] Image source is expected to be a full URL or a path relative to the image base folder specified in the back-end but /blog/2011/mishkinstory/gallery is neither a URL nor a relative path to an existing file or folder.
0
Shares 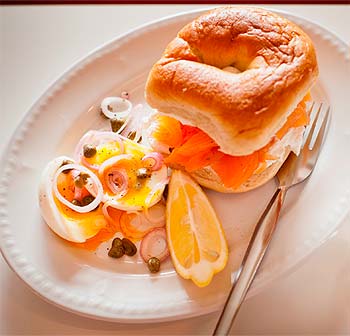 Russell Norman revealed some more information about his next venture Mishkin's in an interview with City AM this morning.

'I’m always using the words “sort of” in front of it because it’s not kosher, and it’s not a traditional Jewish restaurant.' he told the paper. 'It's a sort of sexy, fun version of a Jewish deli. There’s a lot of East London “caff” in it and that strong Jewish tradition around Whitechapel and Bethnal Green that’s pretty much disappeared. It won’t all be matzo ball soup, lox bagels and salt-beef sandwiches, we’re definitely having fun with the menu as well.

We’ll have cod cheek popcorn: cod cheeks – the size and shape of scallops – dipped in tempura-like light batter, then fried. And there will be great cocktails – we’re going back to the thirties and forties to look at gin cocktails that were very popular in this country.'

One thing he revealed was that Mishkin's may have a Jewish theme, but it'll still be serving up distinctly non-kosher food. "After doing a bit of research and speaking to well known Jews, they’ve asked the same question – will you be doing pork? And I’ve said – well, would you like us to do pork? And they’ve all said the same thing: “oh yeah”."