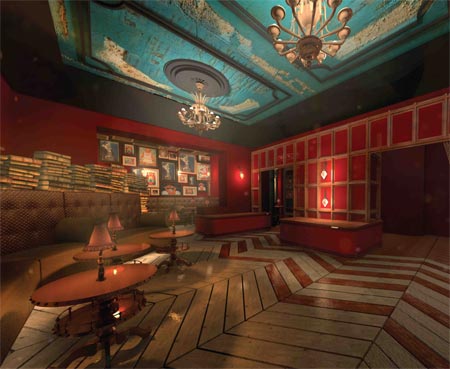 We've had Burger and Lobster, chicken and steak (Tramshed), chicken and egg (Whyte and Brown) and many more combinations. But this latest Russian inspired bar cuts right to the chase offering the more high-end experience of vodka and caviar to keep you going through the evening.

Ruski's will be opening in Kensington and is inspired by a more imperial time in Russian history, with a view to recreating a classic Russian vodka den in London. It's the latest venture from Diego Bivero-Volpe and Antoin Commane - previously behind Bodo Schloss and 5 Pollen Street - who say they "want our guests to drink with comrades and dine like Tsars.”

In charge of the food is consultant chef Scott Hallsworth, ex head chef of Nobu and Wabi (and also behind upcoming Kurobuta) who will be pulling together a menu that features caviar and chips as well as smoked salmon, steak tartare and caviar club sandwiches. This will also include a Russian "hangover cure" of a black bread, steak tartare and caviar-layered sandwich. So that's not at all decedant, then.

Washing all that food down will be a large selection of vodka - apparently due to be the largest in London. If you order by the bottle, it'll be decanted into crystal and there will also be infused vodkas on the menu. And if you fancy a caviar and vodka flight, there will be one available for £50.

Bizarrely, they'll be using Matryoshka dolls (Russian nesting dolls) as drinking vessels and samovars, with large tea urns being used for sharing cocktails. And a signature cocktail called “Tolstoy” is served in a flask hidden inside an antique copy of War and Peace.

Finally - if you're up for a really decadant evening, you can book their “Tsar’s Table” private room for 20, which comes with a own private butler, a direct bell service to the kitchen and vodka, champagne and caviar "on tap".

In all - we don't expect this opening to be the place for a cheap evening out...

Ruski's Tavern opens in September at 1A Kensington High Street, London, W8 5NP. It'll open 8-11pm Tuesday to Friday for food, staying open for drinks until 3am on Tuesday and Thursday through to Saturday.