Riverford settles in Islington with Riverford at the Duke of Cambridge 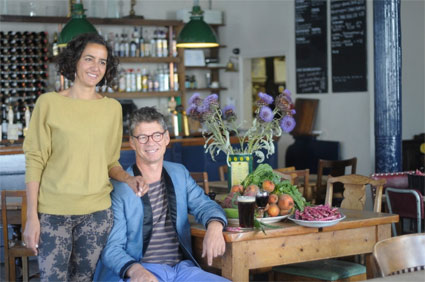 Riverford, best known for their organic food deliveries, have also previously held London pop-ups as well as running their own Riverford Field Kitchen at their farm in Devon. But now they're settling down as they partner with organic pub, The Duke Of Cambridge in Islington, to run a menu by head chef Benoit Berenger with food from the farm.

Riverford at the Duke of Cambridge is a long-term affair, seen as a partner to the original kitchen in Devon. It'll come with a brand new look for the Duke of Cambridge with "dishes where fruit and veg are the stars with an a la carte version of the unique feast style service offered at the Field Kitchen".

We caught up with The Duke of Cambridge to find out more...

Why did Riverford decide to make The Duke of Cambridge their permanent home?

The Duke of Cambridge already has an outstanding reputation of creating beautiful, seasonal food from responsibly sourced ingredients. Sharing good food is at the heart of everything Riverford does, so what better place to do it than a cosy, already much-loved pub, right in the heart of London? The fact that Guy Watson and Geetie Singh (the owners of the two businesses) have got married, is also part of the story!

What changes will be made to the pub as part of the new restaurant?

The Duke of Cambridge will remain as it is – a stalwart of London's gastropub scene; it will be open all day, every day, serving great tasting organic food and drink in the same, according to Observer Food Monthly, “brilliantly warm and relaxed” pub atmosphere. It will of course remain 100% organic.

Can you give us an idea of what will be on the menu?

Riverford founder Guy Watson’s enthusiasm for veg means they will be the star of the show. However this is glorious veg as you’ve probably never had it before, along with a choice of creative meat and fish dishes, all served feast-style as at the highly regarded Riverford Field Kitchen restaurant on the farm at Riverford’s Devon HQ. Alternatively customers can order an á la carte version of the same range.

Riverford at the Duke of Cambridge opens on Friday 7 November at 30 St Peter's Street, Islington, London N1. For more information, follow them on Twitter @twitter.com/DukeOrganic