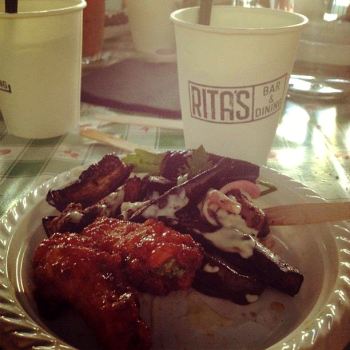 Jackson Boxer, the chap behind Vauxhall's much-vaunted Brunswick House Cafe, is heading north of the river and opening up a new place in Dalston.

Rita's Dining, which opens on Friday 13th July (they're clearly not superstitious folks), was originally going to be a fried chicken shop although as Jackson explained to us it's "evolved into something a bit more varied. Expect fried chicken & waffles, ox-heart tacos, shrimp rolls, soy & ginger hot wings, patty melts and pulled pork with duck heart baked beans."

"I want to serve food and drinks which are both satisfyingly complex and deceptively simple, in a democratic setting at accessible prices, he said. "It's for all my friends who didn't care about food growing up but have begun to take pleasure in it, but whose restaurant landscape is composed entirely of Nando's.

"Originally we wanted to show a city with a profusion of terrible KFC knock offs that fried chicken needn't be food only fit for pigeons, however during pre-launch we found the crowd were highly receptive to, say, offal in its various guises, and that while our fish tacos were applauded, it was our ox-heart tacos which people came back for. Which makes me more happy and excited than I can say."

In the kitchens will be Jackson, Gabriel Pryce who cooked with Jackson at Brunswick House, and pastry chef Phoebe Flynn Oliver. The bar is being overseen by Missy Flynn, formerly of Hawksmoor - and "glueing us all together is Deano Jo, of Real Gold."