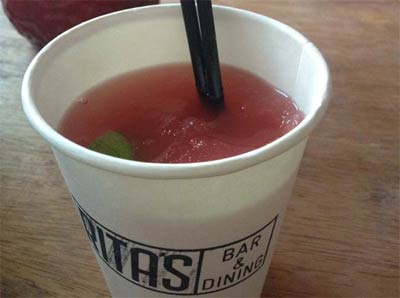 When Rita's Bar and dining landed in Dalston last year, it was an instant hit - with its frozen margaritas (ooh, we just got that...) and the food, particularly the Southern Fried Chicken Roll and the Patty Melt, winning over both locals and people willing to travel way across town for them. However, the tenure at Birthdays, where Rita's was based, was only temporary and it was bid a sad farewell a few months ago.

But now it's back! Rita's has been reborn in Hackney. We caught up with its founders Missy Flynn and Deano Jo to find out more...

What can you tell us about the new Rita's?

Our tenure in Birthdays was hugely enjoyable, however we were essentially cooking in a kitchen we’d improvised out of the back bar and this placed certain limits on our culinary ambitions.

We’ve built this kitchen from scratch to the specific requirements of a hugely expanded menu, which, for us at least, is tremendously exciting. On the other hand there are certain staples, our chicken roll for instance, which we wouldn’t dare drop. In the kitchen Gabriel has stuck with the same influences with new addition Andrew Clarke, while also delving deeper into their joint passion for Asian flavours from the likes of Japan, Korea and China, and adapting them to work along side everything else to create a real of a smorgasbord of comforting, exciting dishes.

And what can we expect from the drinks list and the bar?

Our drinks list is also bigger than before. We have our own bar now, allowing Missy to really develop an exciting cocktail list we are very proud of. We still want to concentrate on serving simple, no fuss mixed drinks made well, with good ingredients and at an affordable price point.

We also wanted the food menu at Rita’s to be food to drink cocktails with and vice versa so we are using some of the dishes from the menu as a starting point, with a small drinks list that we feel covers all the needs of a drinker who might be working their way through our food menu. For example, there's a hard cider with apple and spice or our smoky sriracha mary with gin. Our house Frozen ‘Rita is still a staple as well as a seasonal Rita’s rum punch. This is our take on Fernet Kola for the bravest of tastebuds, using old-school soda siphons and home-made bases to create our own soda mixers rather than relying on better known brands.

The bar is small but perfectly formed. We also have a killer wine list put together by Jackson [Boxer - another co-founder] from the cellars of Fields Morris and Verdin which is something we couldn’t deliver before but are very excited to be able to. Our initial offering will be short and focussed till we find our feet, but we’ve some thrilling bins waiting in wings for the future.

How many people does the new Rita's fit in - and can you book in advance?

There's roughly 65 in total with a private dining room for up to 25. We will certainly be taking bookings, though will hold back a few tables for walk ins.

Who's looking after things?

You’ll see a lot of familiar faces, with a few happy additions. Andrew Clarke has left his position as Head Chef of Salt Yard to boss the kitchen in partnership with Gabriel Pryce. Andrew teamed up with Jackson at the Venice Biennale’s Palazzo Peckham project, so you can’t say he hasn’t been warned.

Jackson will be dividing his time between here and Brunswick House, and is sticking to the front of house for now. Missy Flynn will be reprising her star turn as General Manager while Grace Welch, another survivor of Palazzo Peckham, Brunswick House and most recently The Clove Club, will be Restaurant Manager. And with Deano Jo looking after everyone...

And finally, is this planned as permanent?

This is us, now and forever, we hope. We have taken out a lease on the premises so this is very much our first stand-alone permanent restaurant.

Rita's Bar and Dining is open now at 175 Mare Street, London E8 3RH. For more information follow them on Twitter