Rextail opens up a new cocktail bar on Albemarle Street 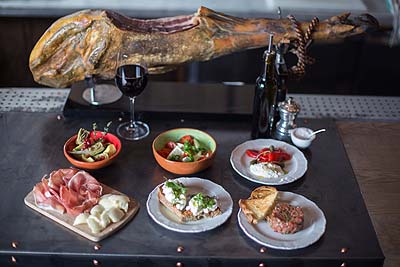 Peckish in Mayfair? Fuss-free, simple and just the right side of swanky is the name of the game at Rextail, the most recent offering from restaurateur Arkady Novikov. And if you’ve been meaning to sample the food at this steak, fish and game restaurant without going all-in, you’re in luck - it’s just opened a standalone bar, promising an informal and low-lit retreat with a selection of light bites to accompany some new cocktail creations from bar manager Paolo Farris.

The nibbles menu was created by head chef Adrian Martin, who’s had stints at the the Birley Group and trained at the Ivy, and features tried-and-tested classics such as steak tartare, piquillo peppers stuffed with goat’s cheese, and tomato and mozzarella toasts.

There’s also the addition of the aforementioned new cocktails, including the Lady L which combines rum and crème de cacao along with crème de violette and plum bitters. Meanwhile for the boys, there’s the more bracing-sounding Steak & Stripe, containing bourbon, vermouth and grapefruit bitters.

Not drinking? The bar offers a good collection of mocktails, which is great if you’re stopping in mid-afternoon for a bite to eat and don’t feel like getting too woozy. Choose from drinks like the White Martini, containing coconut, pineapple, vanilla sugar and cinnamon, or go full-on healthy with green smoothie Spicy Touch, with celery, yellow pepper and chard.

Drop in to the cocktail bar Monday to Saturday between noon until 12:30am, or from Sunday noon until 11pm.

Rextail is at 13 Albemarle Street London, W1S 4HJ. Find out more about Rextail.